Manchester United’s first victory in three league games means they are behind leaders Manchester City only on goal difference. 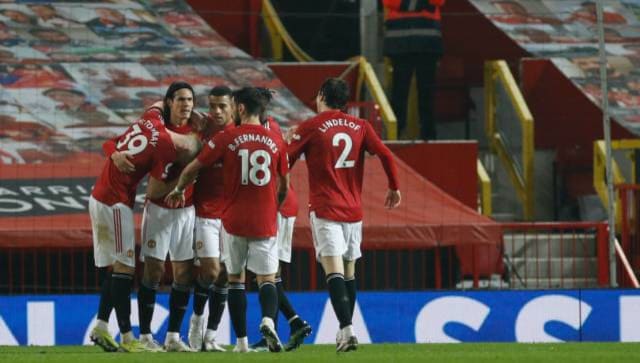 London: Manchester United equalled the biggest win in Premier League history as they crushed nine-man Southampton 9-0, while Arsenal had two players sent off in their defeat at Wolves on Tuesday.

Rampant United scored four times in the first half after Southampton’s teenage midfielder Alexandre Jankewitz was dismissed in the second minute at Old Trafford.

Ole Gunnar Solskjaer’s side hit five more after the break, tying them with Leicester’s 9-0 win at Southampton in 2019 and United’s own 9-0 victory against Ipswich in 1995.

Jan Bednarek’s own goal made it three for the hosts before Edinson Cavani added the fourth.

The goals kept coming as Anthony Martial and Scott McTominay netted before Bruno Fernandes’ penalty after Bednarek was sent off.

Martial and Daniel James scored in stoppage-time to complete an incredible display by United.

“We’ve been waiting for them to show the magic and it was a night for them to go and enjoy it. We’ve not had many times where we could just enjoy the second half,” Solskjaer said.

“You get lots of confidence from a performance like this, scoring goals is always good for a team.”

Southampton manager Ralph Hasenhuttl added: “It was a stupid foul from the young lad (Jankewitz) and kills everything. What can I say? It’s horrible.”

After the frustration of their shock defeat against Sheffield United and dour draw at Arsenal, the demolition job was a much-needed boost to their title bid.

United’s first victory in three league games means they are behind leaders Manchester City only on goal difference.

Pep Guardiola’s team have two games in hand, including one at Burnley on Wednesday.

United took advantage of their numerical superiority in the 18th minute when Luke Shaw swung a cross to far post and Wan-Bissaka bundled his shot past Alex McCarthy from close range.

It was only Rashford’s second goal in his last 10 appearances in all competitions.

Rashford, subjected to vile abuse on social media recently, claimed the assist for United’s third in the 34th minute when his cross was turned into his own net by Bednarek.

Cavani scored United fourth with a thumping header from Shaw’s cross in the 39th minute.

Martial ended his eight-game goal drought when he lashed home from close range in the 69th minute.

McTominay rifled home from 25 yards two minutes later and Fernandes struck from the spot in the 87th minute after Bednarek fouled Martial.

There was still time for Martial to score again before James capped the rout. David Luiz was sent off near half time break in Arsenal’s defeat at Wolves. AP

A seven-game unbeaten league run had propelled Arsenal back into contention for a return to the Champions League next season and they could have moved to within five points of the top four after Nicolas Pepe’s strike opened the scoring at Molineux.

But David Luiz’s third red card in two seasons as an Arsenal player for clipping Willian Jose on the stroke of half-time turned the game around.

Goalkeeper Bernd Leno then rounded off a miserable night for the visitors when he was also dismissed for handling outside his box.

A much-needed victory for Wolves ended an eight-game winless run and takes them 12 points clear of the relegation zone.

“The team was really on top of the game, we should have been three or four-nil up and after the red card the game changed completely,” said Arsenal manager Mikel Arteta.

“I’ve seen it 10 times in different angles and I cannot tell you where the contact is.”