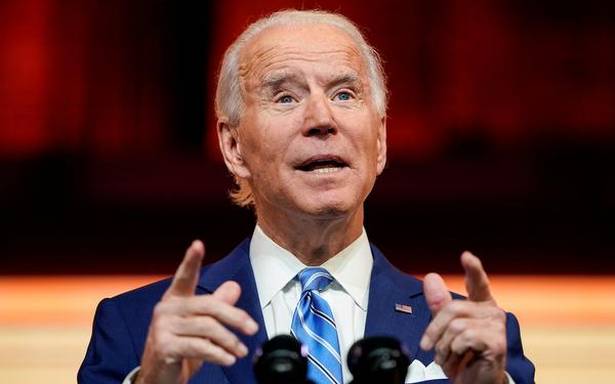 The plan aims at speeding up vaccination, providing $1,400 checks to Americans, and boosting economy

President-elect Joe Biden has unveiled a $1.9 trillion coronavirus plan to end “a crisis of deep human suffering” by speeding up vaccines and pumping out financial help to those struggling with the pandemic’s prolonged economic fallout.

Called the “American Rescue Plan,” the legislative proposal would meet Mr. Biden’s goal of administering 100 million vaccines by the 100th day of his administration, and advance his objective of reopening most schools by the spring. On a parallel track, it delivers another round of aid to stabilize the economy while the public health effort seeks the upper hand on the pandemic.

“We not only have an economic imperative to act now — I believe we have a moral obligation,” Mr. Biden said in a nationwide address on Thursday. At the same time, he acknowledged that his plan “does not come cheaply.”

It would also extend a temporary boost in unemployment benefits and a moratorium on evictions and foreclosures through September.

And it shoehorns in long-term Democratic policy aims such as increasing the minimum wage to $15 an hour, expanding paid leave for workers, and increasing tax credits for families with children. The last item would make it easier for women to go back to work, which in turn would help the economy recover.

The political outlook for the legislation remained unclear. In a joint statement, House Speaker Nancy Pelosi and Senate Democratic leader Chuck Schumer praised Mr. Biden for including liberal priorities, saying they would move quickly to pass it after Mr. Biden takes office next Wednesday. But Democrats have narrow margins in both chambers of Congress, and Republicans will push back on issues that range from increasing the minimum wage to providing more money for States, while demanding inclusion of their priorities, such as liability protection for businesses.

“Remember that a bipartisan $900 billion #COVID19 relief Bill became law just 18 days ago,” tweeted Senator John Cornyn, R-Texas. But Mr. Biden says that was only a down payment, and he promised more major legislation next month, focused on rebuilding the economy.

“The crisis of deep human suffering is in plain sight, and there’s not time to waste,” Mr. Biden said. “We have to act and we have to act now.”

Still, he sought to manage expectations. “We’re better equipped to do this than any nation in the world,” he said. “But even with all these small steps, it’s going to take time.”

His relief Bill would be paid for with borrowed money, adding to trillions in debt the government has already incurred to confront the pandemic. Aides said Mr. Biden will make the case that the additional spending and borrowing is necessary to prevent the economy from sliding into an even deeper hole. Interest rates are low, making debt more manageable.

Mr. Biden has long held that economic recovery is inextricably linked with controlling the coronavirus.