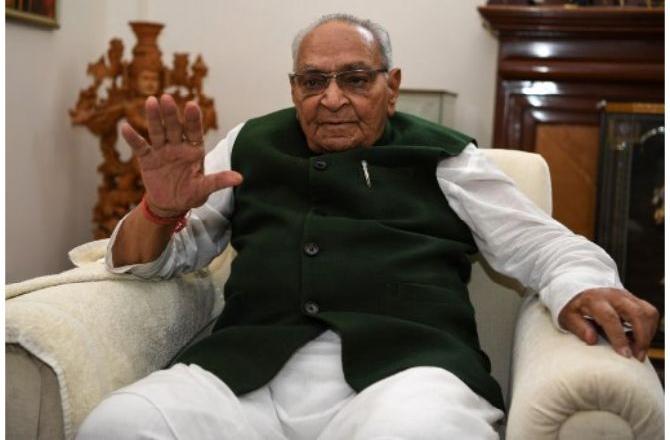 A day after celebrating his 93rd birthday, veteran Congress leader and former Madhya Pradesh Chief Minister Motilal Vora passed away on Monday afternoon. He was 93.

Vora breathed his last at the Fortis hospital here, where he had been admitted since December 19 with complaints of dyspnea or shortness of breath with altered sensorium and hypotension (low blood pressure).

He was admitted under critical care cardiologist Dr Sameer Srivastava. On Monday morning, he complained of hypotension and hypoxemia, after which he was intubated.

He experienced a septic shock thereafter and was declared dead at 3.52 pm.

His son Arun Lal Vora, a MLA from Chhattisgarh, tweeted: “One of the strongest trees of the Congress family and a jewel of the country’s politics, the body of my revered father will be kept at his Delhi residence from 6 pm to 8 pm for paying last tributes.”

Vora had tested COVID-19 positive in October but recovered and was discharged from hospital on October 16.

He was admitted to the Escorts Hospital on the Okhla Road a few days ago with complaint of urinary infection as well.

As soon as the news of his death spread, condolences poured in.

President Ram Nath Kovind tweeted: “Sad to hear that veteran Congress leader Shri Motilal Vora is no more. He was humility personified, and belonged to a generation of leaders who carry their politics with unflinching conviction till the end. My heartfelt condolences to his family and friends.”

In a tweet, Prime Minister Narendra Modi said: “Shri Motilal Vora Ji was among the senior-most Congress leaders who had vast administrative and organisational experience in a political career that spanned decades. Saddened by his demise. Condolences to his family and well-wishers. Om Shanti.”

Congress leader Rahul Gandhi said: “Vora ji was a true Congressman and a wonderful human being. We will miss him very much. My love and condolences to his family and friends.”

Congress General Secretary Priyanka Gandhi Vadra tweeted: “Every leader of the Congress, every worker is feeling personally saddened by the death of Motilal Vora ji. Vora ji was a symbol of loyalty, dedication and patience to the ideology of the Congress.”

“He was present at every party meeting even at the age of 92; he openly expressed his views on every decision. Today, feeling sad that an elderly member of the family has left. We will all miss him very much.”

Congress national spokesperson Randeep Singh Surjewala said: “A giant is no more! Motilal Vora was the epitome of commitment, dedication and loyalty. He inspired an entire generation by his untiring attitude and capacity to brave every adversity. My heartfelt homage.”

Congress General Secretary (Organisation) KC Venugopal said: “Deeply saddened by the demise of Motilal Vora ji, a guiding light to many of us, within the Congress and beyond. His dedication towards our nation and party will inspire generations to come. Heartfelt condolences to his family, friends and followers. May his soul rest in peace.”