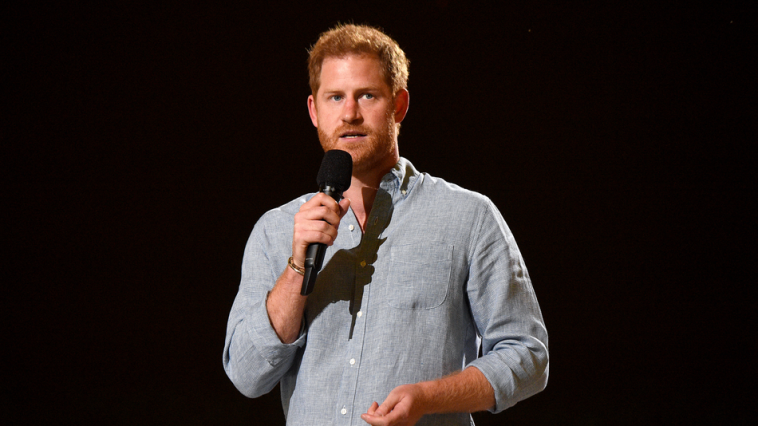 Sometimes the world seems to forget that Prince Harry has lived through trauma that few people could even begin to imagine.

At some point, the tragic death of his mother, Princess Diana, became just a footnote in his life of privilege. While the media and public may sympathetically recall the famous photo of a 12-year-old Prince Harry walking behind his mother’s coffin, they have little tolerance for lingering on how his anguish and grief shaped who he became, including his decision last year to withdraw from the royal life into which he’d been born. When he reflects on the experience, his critics brand him as ungrateful and whiny.

Yet Prince Harry knows this is a trap set not only to ensnare him but also anyone else who dares to talk openly about their mental health and well-being. For many people, watching another human being cope with trauma or a mental illness is frightening. So instead they embrace a culture of silence and stigma that traps people — including themselves — with their pain.

No matter the criticism or consequence, Prince Harry appears determined to liberate himself from this prison, and hold the door open for anyone who wishes to follow. In The Me You Can’t See, a new Apple TV+ docuseries that Prince Harry co-created and executive produced with Oprah Winfrey, the husband and father of two takes viewers deep into his journey of suppressing the traumatic grief of losing his mother, turning to drugs, alcohol, and anger to cope, and finding a path out through self-awareness and therapy.

“The only way to free yourself and break out is to tell the truth,” he says.

“The only way to free yourself and break out is to tell the truth.”

Though Prince Harry is referring to the emotional and psychological distress of belonging to the British monarchy, versions of that line are a recurrent theme in The Me You Can’t See. (We were provided access to the first three of five episodes.)

This defiant message, spoken by both celebrities and the average person experiencing mental health issues in the docuseries, is what makes it worth watching. Anchored by interviews with Prince Harry and Oprah, it’s an ambitious portrayal of mental illness that demonstrates what it’s like to live with post-traumatic stress disorder, addiction, obsessive-compulsive disorder, depression, schizophrenia, and suicidal feelings.

The show is driven by empathy for suffering but is grounded in both lived and scientific expertise. People’s stories of hardship and resilience are the focus of each episode’s vignettes while clinical psychologists appear briefly onscreen or through voiceover to provide important context. With rare exceptions, like when the director repeatedly searches for visual drama in the cleaning rituals of an Olympics-bound boxer who experiences OCD, the depiction of mental illness isn’t sensationalized.

Still, some scenes are so affecting that they might feel traumatic. Lady Gaga, a longtime and vocal mental health advocate, discusses how a producer raped and abused her over a period of months, then abandoned her alone and pregnant on a street near her parents’ house after she became physically ill. Oprah talks about an older cousin who began molesting her when she was nine years old. She also shares anecdotes of sexual trauma experienced at home by the adolescents who’ve attended her leadership academy for girls in South Africa. If a viewer improbably manages to avoid weeping during the first two episodes, that will change in the third episode when a young Syrian refugee vividly describes trying to search for his brother’s body on a playground after it’s been bombed.

Unlike much of the content made for digital platforms, The Me You Can’t See isn’t something to binge watch, particularly if you’ve experienced mental illness or trauma and worry about the effects of immersing yourself in stories about both subjects.

A trepidatious viewer might start with the first episode and revisit the series after a few days. We would recommend watching in the company of a trusted friend or loved one who won’t play the contrarian by questioning Prince Harry’s motives or, worse, whether mental illness is that serious. Those who fear being thrust into emotional turmoil by watching the show could instead listen to Prince Harry’s interview with Dax Shepard on the Armchair Expert podcast or Oprah’s interview with Brené Brown on the Unlocking Us podcast. Both of the recent interviews cover critical aspects of mental health, well-being, and trauma without the show’s visual and visceral triggers.

When the camera captures revealing moments, it’s worth the time and emotional investment. One vignette focuses on Oprah’s relationship with Alex Molina, who the former talk show host met nearly two decades ago when Molina was a young adult experiencing homelessness. Convinced that all Molina needed to succeed was someone who believed in her, Oprah gifted her with a college scholarship. What Oprah failed to understand is how severely Molina’s post-traumatic stress disorder, caused by childhood abuse and household violence, would affect her chances of success.

When Oprah pays for Molina to receive treatment at an inpatient facility and they talk about her impending transition out of care on a video call, Oprah is unexpectedly impatient with the progress she’s making.

“It’s just really hard,” she says. “Sometimes I feel like she just doesn’t get it.”

Separately, Oprah admits: “I’ve made mistakes. I recognize that my expectation was faulted. I wasn’t taking into account the mental illness at all. My journey with Alex caused me to look at mental health in a very different way than I had approached it before.”

“I’ve made mistakes. I wasn’t taking into account the mental illness at all.”

This admission is so profound because Oprah is one of the few cultural icons who’s spent decades de-stigmatizing mental health through her interviews on the subject. The moment serves as an important reminder that there are no quick fixes, even if your intentions are good, and that supporting someone who experiences mental illness is a repeated act of humility, grace, and unconditional love. That theme resurfaces again in difficult conversations between non-famous parents of children with a mental health condition.

Prince Harry makes clear that he wishes his family had given him such support.

“To be honest with you, like a lot of other people my age could probably relate to, I know I’m not going to get from my family what I need,” he says.

It’s this high-stakes vulnerability from Prince Harry that propels the series. In one scene, he undergoes Eye Movement Desensitization and Reprocessing (EMDR), a type of therapy used to treat trauma. In the session filmed, he hopes to heal the persistent anxiety and dread he feels when flying back to London from abroad. Those feelings, he explains, are borne of a lifetime of feeling “hunted,” “helpless,” and as if there’s no “escape.”

While Prince Harry’s critics will assail him for criticizing family or being dramatic, his journey feels authentic to an empathetic viewer. He grasps that inviting strangers into his inner life can help others do the same. It’s not a sacrifice but a conviction.

Prince Harry makes a compelling spokesperson for this reason, though he faces the long-term challenge of knowing when to use his personal story as a means of advocacy and when to cede the stage to others. In general, The Me You Don’t See balances this well, giving ample time to people who aren’t celebrities.

There is a sharp contrast, however, between the rich and famous who navigate their troubles with endless resources and everyday folks who are coping with mental illness while they lack basic needs like housing and income. Indeed, the series falls short in the initial episodes when it treats mental illness as something that happens in a vacuum. While personal trauma is covered extensively, there’s little mention of how experiences like poverty and racism affect mental health. Research makes clear that such factors play a powerful role, and understanding this relationship is arguably the future of mental health education and treatment. Similarly, the path to recovery in the series consistently goes through a clinical therapist. There’s no doubt that formal treatment can be life-changing (and life-saving), but not everyone wants, needs, or can afford a therapist. The first episodes of The Me You Don’t See would be even more compelling with a candid discussion of alternatives to therapy.

“But, certainly now, I will never be bullied into silence.”

No one could’ve predicted that Prince Harry, as a grieving 12-year-old or hard-partying young adult, would help lead the charge against mental health stigma, a cause he took up earnestly five years ago when he co-founded a campaign on the subject. In the years since, his reckoning with the institution of the monarchy and the tabloid press, along with his marriage to Meghan Markle, brought Prince Harry to a universally familiar place: realizing that it’s impossible to go one step further without asking for help.

With The Me You Don’t See, Prince Harry is extending a hand to people who might be terrified of saying that aloud. He knows, perhaps better than most, what confinement feels like, and he doesn’t want others to suffer alone.

“That was one of the biggest reasons to leave,” he says of the decision to surrender his royal duties. “Feeling trapped and feeling controlled, through fear, both by the media and by the system itself, which never encouraged the talking about this kind of trauma. But, certainly now, I will never be bullied into silence.”

The Me You Don’t See premieres on Apple TV+ on Friday, May 21.

RELATED:  Tom Holland: Spider-Man 3 is the most ambitious standalone superhero movie ever made