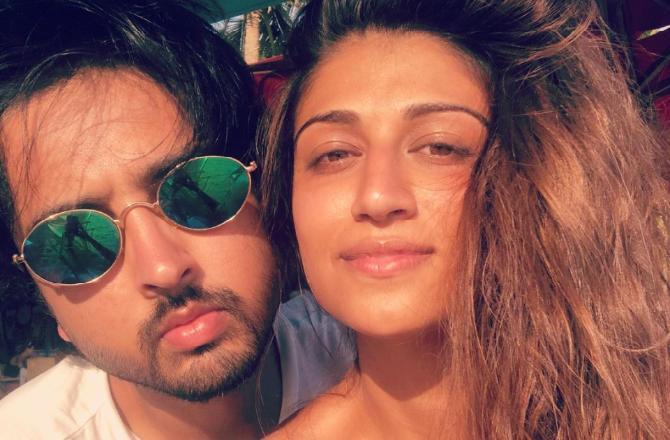 2020 is the year of marriages. We saw Rana Daggubati, Kajal Aggarwal, Aditya Narayan, and Neha Kakkar taking wedding vows. And now, if reports are true we will likely see one more addition to the list. Reportedly, Padmini Kolhapure’s son Priyaank Sharma is all set to tie the knot with producer Karim Morani’s daughter Shaza Morani.

The two, who are best friends and are regularly spotted vacationing or dining out together, are all set to take their relationship to the next level. The couple is likely to have a court marriage. Speaking to The Times of India, Shaza’s father Karim Morani said, “Yes, Shaza and Priyaank are getting married but in January or February.”

The report further stated that the families have consented and the date for the D-day is almost fixed. The families also hosted a shagun ceremony on Tuesday, December 8 where Priyaank is only going to officially propose to Shaza.

Priyaank Sharma and Shaza Morani know each other for quite some time and their social media love for each other is no secret. The duo regularly shares pictures and videos of themselves holidaying together. Recently, Shaza shared a throwback picture on her Instagram handle. In the picture, Shaza and Priyaank can be seen enjoying on the beach. “Missing when sunburns were my thing #ifyouknowyouknow #iblamemyfriendsformyinapporiatejokes (sic)”, she captioned the picture.

Priyaank also shared a picture from a similar location on his Instagram handle. In this one, the duo can be seen giving some cute pose for the camera. “Right back at yaaa! (sic)”, he captioned the picture.

A couple of months back, Shaza had shared a picture in which the duo can be seen enjoying a boat ride on the ocean. Shaza looked gorgeous in her green-and-white bikini soaking in some fresh air. “Happy Sunshine (sic)”, she captioned the picture. Take a look:

In this picture that Shaza had shared in 2018, she and Priyaank can be seen on a boat with Dubai’s Atlantis Hotel in the background. “Can you be jealous of someone’s birthday while being on their birthday? (sic)”, she had captioned the picture.

Last few months have been tough for Shaza Morani and her family. In April, Shaza, her father Karim Morani and sister Zoa Morani had contracted COVID-19 infection. Zoa who had returned from Rajasthan around mid-March tested positive for COVID-19. Shaza, who had returned from Sri Lanka in the first week of March, showed no symptoms but was admitted to Nanavati Hospital, where she tested positive. Later, her father too had got infected with the deadly virus. After treatment, all of them tested negative.