Home EntertainmentGossips Priyanka Chopra beams with joy as she signs her book Unfinished copies ahead of her U.S virtual book tour

Priyanka Chopra beams with joy as she signs her book Unfinished copies ahead of her U.S virtual book tour 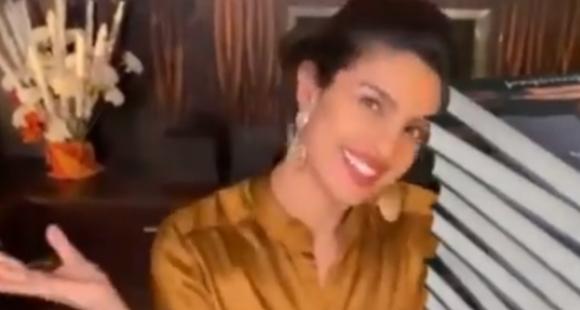 Priyanka Chopra Jonas’ upcoming book Unfinished is all set to release on February 9. Ahead of the release, PeeCee was seen busy signing the copies.

Priyanka Chopra beams with joy as she signs her book Unfinished copies ahead of her U.S virtual book tour

The global icon Priyanka Chopra Jonas is currently basking in the success of her recently released film The White Tiger. The desi girl is receiving accolades for her brilliant stint in the Ramin Bahrani’s directorial that also has Rajkummar Rao in the lead role. Notably, besides this, the Baywatch star has got another reason to be on cloud nine. Her upcoming biography book Unfinished, which will reveal many interesting stories about her journey, is all set to release on February 9. As the days are inching near, Priyanka is busy signing the book for people “who have bought tickets for her U.S. virtual book tour.”

Taking to her Instagram handle, the global star shared a video wherein she cannot stop smiling as she signs the book copies. While sharing the video, the actress wrote, “Over here signing away for you lovely people who have bought tickets for my U.S. virtual book tour! Don’t worry, there’s still time to get your tickets and have a chance to receive a personally signed copy of #Unfinished…but hurry, only while supplies last! Head to the link in my bio to get yours.” In the video, Priyanka looked lovely as she brims with joy signing the copies. Towards the end of the video, PeeCee is seen kissing the book as she can’t hold her excitement.

Earlier, in an interview with the Film Companion, Priyanka had said that her book will include only the things that matter to her in the present. She said, “I was honest about things that mattered to me and my journey right now. Which is why I mean that this is a very honest reflection of where I am at the moment.”

Also Read: Priyanka Chopra & her pooch Diana keep it classy and stylish as they turn into a “White Tiger and her cub’