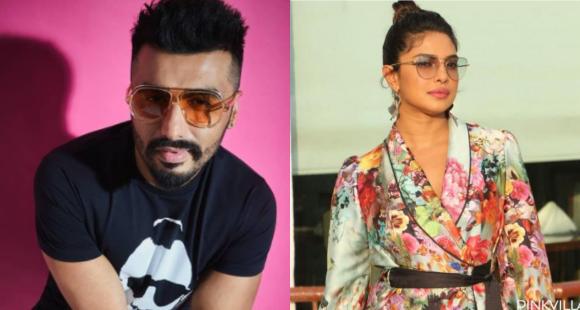 Arjun Kapoor took to social media to share new photos of himself from a shoot. His Gunday co-star, Priyanka Chopra Jonas could not resist dropping a sweet comment on his photos.

Often when stars share photos on social media, their fans cannot stop gushing over them. And sometimes, even their close friends from Bollywood shower love on the photos. Speaking of this, recently, Arjun Kapoor dropped stunning photos on social media from a shoot and well, his friend and Gunday co-actor, Priyanka Chopra Jonas could not resist commenting on it. Priyanka and Arjun share a great bond and sometimes, fans get a glimpse of it on social media via their comments on each other”s posts.

Once again, as Arjun took to his Instagram handle to post stunning glimpses from a shoot, Priyanka dropped a sweet comment on it. In the photo, we can see Arjun clad in a casual look with oversized and funky shades. He is seen clad in a black tee with ripped jeans and cool sneakers. The actor is seen striking several poses in the photos. As he posed, one could see his charming smile and casual style and well, that surely seemed to have impressed his fans.

Meanwhile, Priyanka has been quite occupied lately with the promotions of her film, The White Tiger with Rajkummar Rao and Gourav Adarsh and her upcoming book, Unfinished. On the other hand, Arjun recently has been shooting for Bhoot Police in the city. He had returned from Jaisalmer after having shot with Saif Ali Khan. The film also stars Jacqueline Fernandez and Yami Gautam. It is helmed by Pavan Kirpalani and produced by Akshai Puri and Ramesh Taurani.