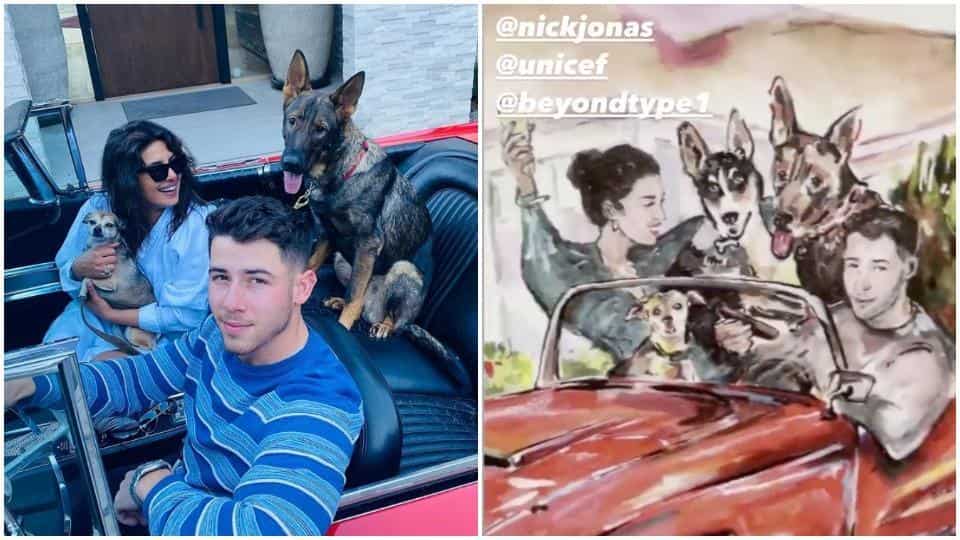 Actor Priyanka Chopra and singer Nick Jonas sent out the most adorable Christmas cards to their friends and family. Recently, fashion designer Manish Malhotra took to his Instagram Stories to share a video of the card with his followers.

The card’s front panel showed an illustration of Priyanka and Nick, enjoying a car ride with some champagne and their three adorable dogs. There is her chihuahua Diana in her lap, German shepherd Gino and husky Panda in the back seats. Inside the card is a handwritten note, wishing Manish ‘Happy Holidays’ from the two of them.

Sharing the video, Manish wrote, “Thank you dearest @priyankachopra @nickjonas.” He also tagged UNICEF, of which Priyanka is the global ambassador and Beyond Type 1, a charity supported by Nick for patients of diabetes.

Priyanka and Nick had to celebrate Christmas in London this year as they could not go home to Los Angeles due to the lockdown imposed in Britain amid spiking coronavirus cases. They had posted special wishes with their followers on the holiday. Priyanka had shared a photo of herself in a red Santa cap, holding their dog Diana and cuddling with Nick. “Perfect From our family to yours, happy holidays and a happy, healthy New Year. @nickjonas @diariesofdiana,” she had captioned her post.

Priyanka was in London to shoot for her film, Text For You. It is a a remake of the German film SMS Fur Dich and also stars Sam Heughan, Celine Dion, Russell Tovey and Omid Djalili. Reportedly, Nick had also shot for a cameo in the film.

Directed by Jim Strouse, Text For You is about a young woman, reeling from the death of her fiancé in a car accident. She continues to send romantic messages to his old phone number even after two years and develops a bond with the current owner of the number, a man suffering a similar heartbreak. Celine is said to play the catalyst who brings them together.