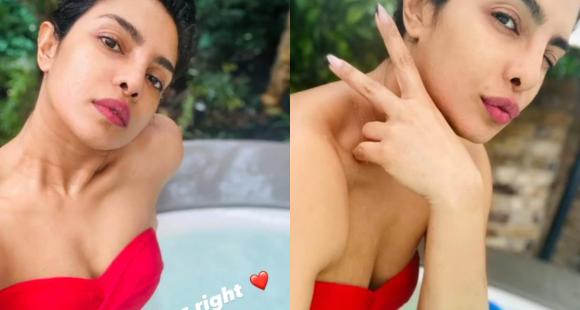 Taking to Instagram, Priyanka Chopra gave millions of her fans a look at her relaxed Saturday as she looked like a total stunner. Check it out below.

Priyanka Chopra slips into a chic red bikini as she does ‘Saturday’s right’ after a hectic work week.

Priyanka Chopra Jonas is not just making her presence feel onscreen but the actress is also dabbling in between multiple projects. Donning different hats like that of a producer or entrepreneur, PeeCee is doing it all in style. One look at her Instagram and you can see that the actress is more busy than ever. However, she brought in the weekend on a super relaxed note.

The White Tiger actress slipped into a chic red bikini and took out some time to spend on self care. Taking to Instagram, Priyanka gave millions of her fans a look at her relaxed Saturday. In her selfies, Priyanka looked like a total stunner as she sported a twisted tube red bikini and a deep lip colour as she sat in her jacuzzi. Sharing the picture, the actress captioned it, “Doing Saturday”s right,” with a ‘Happy Saturday’ GIF.

Priyanka treated her fans to not one, but two pictures. The second one was her goofy self as she winked and pouted for the camera while using the GIF ‘Have a nice weekend’.

Check out Priyanka Chopra’s photos below: Priyanka recently made her mark in Ramin Bahrin’s The White Tiger. The actress has been receiving praise from all quarters for her small yet powerful act in the supporting role. The film, which also stars Rajkummar Rao and Gourav Adarsh in the lead role, has created a massive buzz on social media.

Did you like or love the movie? Let us know in the comments below.

ALSO READ: Janhvi Kapoor having mommy Sridevi’s pic as her phone wallpaper will make your heart melt; Check it out

X
Katrina Kaif gives a glimpse of her ‘Saturday nights’ as she shows new trick of …GossipsKatrina Kaif recently took to her Instagram handle and drop a video wherein she was seen chilling with her friends on weekend. The video featured the …
close