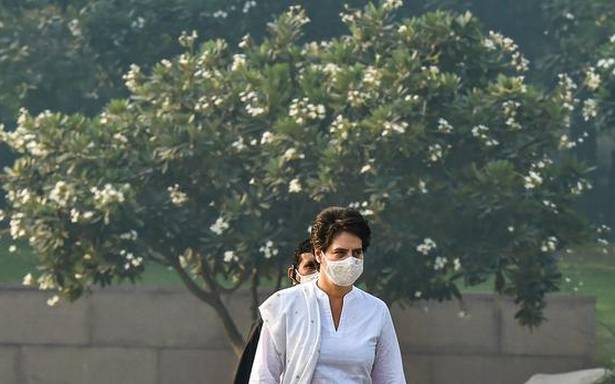 Congress general secretary Priyanka Gandhi Vadra on Monday wrote to Uttar Pradesh Chief Minister Yogi Adityanath to highlight the plight of cattle in the State and suggested that it could take “inspiration” from Congress-ruled Chhattisgarh to protect “gaumata”.

Referring to pictures of dead cattle from Sojna in Uttar Pradesh’s Lalitpur, Ms. Gandhi, who is the Congress in-charge for the State, asserted that Mr. Adityanath had promised building ‘gaushala’ (cow shelter) to protect cattle when he came to power. However, such promises had been largely on paper, she said.

The Congress leader said the reasons for the death of the cattle in Sojna was yet to be officially ascertained but photographs clearly showed that they had died out of hunger and starvation.

“Every time such pictures come out, discussions take place but no concrete action is taken. Who is responsible for this,” Ms. Vadra asked even as she alleged collusion between corrupt officials and ‘gaushala’.

Taking on BJP’s dominant political discourse of cow protection in the Hindi-belt States, Ms. Vadra quoted Mahatma Gandhi in her letter to remind the Uttar Pradesh Chief Minister about the importance of protecting cows.

“Gandhiji considered cow as a poem of compassion. She is the mother of crores of Indians. He believed that cow protection does not only mean the protection of the cow, but the protection of all those creatures which are helpless and weak,” Ms. Vadra wrote in her letter, arguing that Uttar Pradesh failed to deliver on its promise of cattle welfare.

She also talked about problems faced by farmers because of the damage to their crops by stray cattle and how many of them had been forced to keep a night vigil or spend money on fencing their fields.

The Congress leaders cited Chhattisgarh as a model State that had launched “Godhan Nyay Yojana,” not just to take care of cattle but also generate wealth from the cattle and help protecting the environment.

She claimed that Chhattisgarh bought ₹15 crore worth of cow dung every month and used them to create compost that was then sold through government agencies at subsidised rates.

Ms. Vadra claimed that the scheme had prompted people to feed their cattle fodder to generate dung and had also become a source of income for the women of poor households.