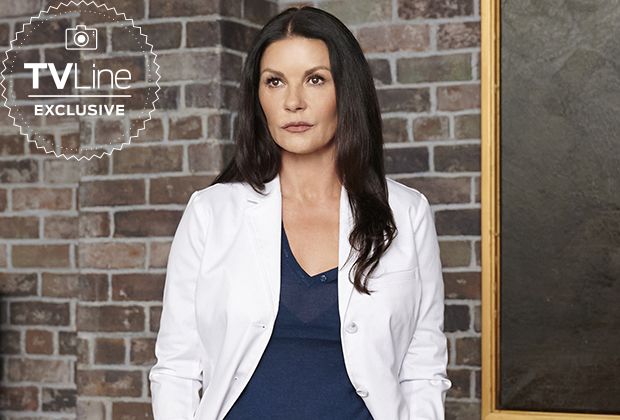 It takes someone very powerful to intimidate Martin Whitly, and that someone is Catherine Zeta-Jones.

As series co-creator Chris Fedak tells TVLine, Zeta-Jones’ arc will be “a very Martin-centric storyline,” prompted by “a reason for him to be in the infirmary for a couple of episodes.”

Though Dr. Capshaw will at first revel in tasking Martin with unsavory jobs like cleaning bedpans, she’ll start to see Martin in a new light as he proves valuable in treating patients. Per Fedak, Zeta-Jones’ character will serve as an “interesting foil” for Michael Sheen’s: “It’s going to be an exciting relationship. There will be a bit of bonding between the two of them, and really crazy things are going to happen — very few of them being good things, but entertaining.”

As seen in the photos below, one of Martin’s first meetings with Capshaw will find her drilling right into a patient’s skull, which has Martin looking surprisingly unnerved.

“When we were able to actually get Catherine in this role, Chris and I were just thrilled,” adds co-creator Sam Sklaver. “She’s so wonderful, and the fact that she and Michael are from the same town in Wales — Michael knows her family, but the two of them had never met before, and the two of them together… I have to think it’s a career highlight, even if I go on to do other things in my career.”

New episodes of Prodigal Son air Tuesdays at 9/8c on Fox; scroll down for a first look at Zeta-Jones’ debut.