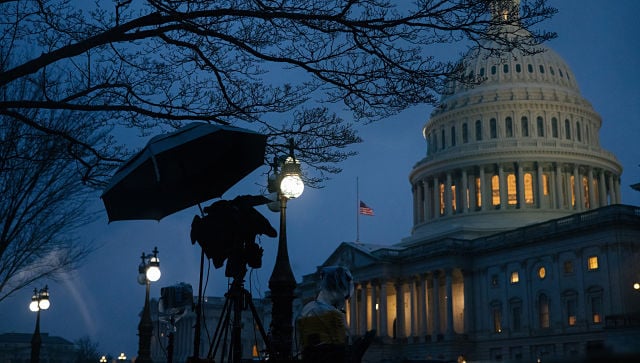 A TV camera is set up outside the Capitol in Washington on Wednesday. By Alyssa Schukar © 2021 The New York Times

The House Democrats prosecuting former president Donald Trump rested their case Thursday, branding him a clear and present danger to United States democracy who could sow new violence like the deadly assault on the Capitol last month if he was not barred from holding office again.

Calling on senators to render “impartial justice” and embrace the “common sense” of the country’s founders, the nine impeachment managers closed their case by laying out the grave damage the 6 January riot had caused not just to lawmakers or police officers at the Capitol, but to the democratic system and America’s standing around the world. None of it, they argued, would have happened without Trump.

Raskin said the evidence that Trump cultivated, incited and then showed no remorse for the attack warranted making him the first impeached president ever to be convicted and the first former president to be disqualified from holding future office.

“If you don’t find this a high crime and misdemeanour today, you have set a new terrible standard for presidential misconduct in the United States of America,” he said.

A day after delivering the Senate a harrowing account of the deadly violence, replete with chilling, previously unseen security footage, the prosecutors returned for the trial’s third day with new video clips, court documents and interviews in which the rioters defended their actions by citing Trump’s directives and desires.

“We were invited here,” one of them screamed, the clip echoing through the Senate chamber.

“Their own statements before, during and after the attack made clear the attack was done for Donald Trump — at his instructions and to fulfill his wishes,” said Representative Diana DeGette of Colorado.

They also argued that Trump had encouraged and celebrated violence before 6 January — such as a White supremacist rally in Charlottesville, Virginia, in 2017 and scuffles during his campaign rallies — and shown no remorse for whipping up thousands of his loyal supporters by telling them to “fight like hell” that day. Afterward, they noted, Trump called his speech “totally appropriate.”

“I’m not afraid of Donald Trump running again in four years,” said Representative Ted Lieu of California. “I’m afraid he’s going to run again and lose, because he can do this again.”

Their task to convict remains a daunting one as they aim to persuade Republican senators who have shown no appetite for breaking with Trump to do so.

By turn, the managers sought to appeal to Republicans’ sense of patriotism and decency. They read the words of fellow Republicans who voted in the House to impeach Trump and from the former president’s own Cabinet secretaries, who resigned in protest after the deadly riot. They played audio of traumatised aides who had contemplated leaving government after the attack. And they recounted the humiliating taunts of foreign adversaries who looked on in glee.

But already Wednesday, Republican senators who sat through a vivid retelling of an assault they lived through appeared unmoved from their determination to acquit Trump.

Seventeen Republicans would have to join every Democrat to achieve the two-thirds majority needed for conviction.

Trump’s lawyers are expected to present his defence beginning Friday at noon. They intend to deny that Trump was responsible for the attack or meant to interfere with the electoral process underway at the Capitol, despite his repeated exhortations to supporters to “fight like hell” to “stop the steal.”

One of the lawyers, David Schoen, derided the Democrats’ presentation as a thinly sourced “entertainment package” and “offensive” during an appearance on Fox News while the trial was underway on Thursday.

“In no setting in this country where someone’s guilt or innocence is being adjudicated would this kind of approach be permitted,” he said.

The trial is moving at a galloping pace, and senators could reach a verdict by the end of the holiday weekend. But first, senators will have a chance to question the prosecution and defence, and the managers may force a debate and vote on calling witnesses.

Prosecutors rest their case, warning Donald Trump 'can do this again' if he is not convicted