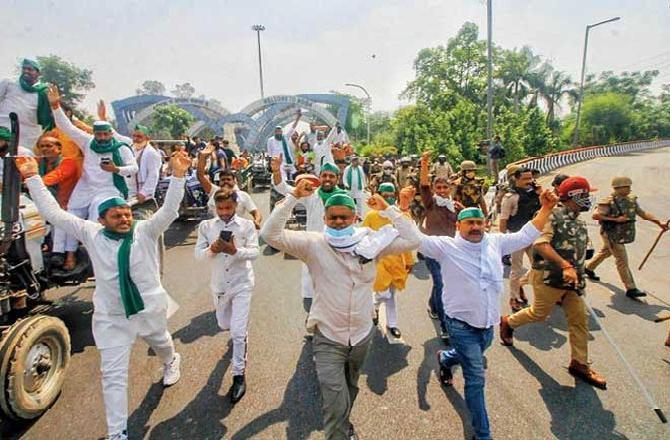 Representatives of farmers, who held talks with the government on Tuesday over their demand for the repeal of three new farm laws, said that the meeting remained inconclusive and they will continue their protest.

A farmer leader also said that the meeting was good and some progress was made and during the next meeting with government on Dec 3, they will convince it that the new farm bills are not pro-farmer.

Chanda Singh, a representative of protesting farmers, later told the media that their protest will continue till they take something from the government “be it bullets or peaceful solution”.

“Our movement will continue and we will definitely take back something from the government, be it bullets or peaceful solution. They want discussion and not a solution. We will come for more discussions again with them,” he said.

Tomar told the media after the talks held at Vigyan Bhawan that the “meeting was good” and another round of talks will be held on December 3.

“The talks went on for three hours but remained inconclusive. The government proposed that there will be an 11-member committee in which five members will be from the government and six from the farmers’ side. But we rejected the proposal. We had told them that anti-farmer laws must be withdrawn. There is no other way to solve farmers’ problems,” he said.

Manjeet Singh Dhaner, a farmer leader, told the media that the next level of talks will be held on Thursday at 12 pm.

“Our agitation will continue. Tomorrow a committee will list out the problems in the anti-farmers laws. Day after tomorrow, we will meet again. We have told them that we will continue our protest until the laws are withdrawn,” he said.

“Today’s meeting was good and some progress was made. During our next meet on 3rd Dec with government, we’ll convince them that no clause of Farm law is pro-farmer. Our agitation will continue,” he said.

Tomar said they wanted a small group to be constituted but farmers’ leaders wanted that the talks should be held with everyone.

“We do not have a problem with it. We appeal to the farmers to suspend the protests and come for the talks. However, this decision (to end protest) depends on farmers’ unions and farmers,” he said.

Sources said that government had suggested that the proposed committee will also have agricultural experts apart farmer representatives apart from those from the government.

Thousands of farmers are protesting in Delhi and its borders against three new farm laws enacted by the government.