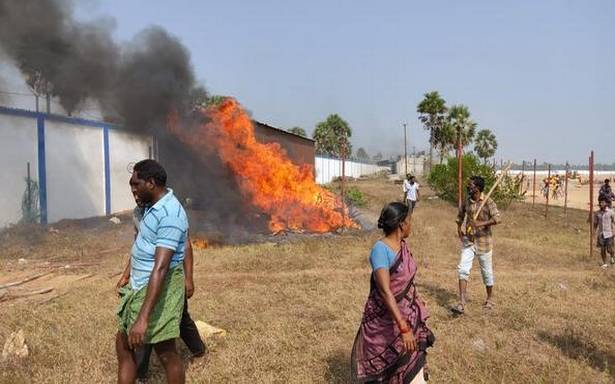 A few hundred protesters, led by women, on Thursday allegedly damaged property, machinery and the protection wall on the 498-acre site proposed for a pharma company by Divi’s Laboratories Limited at Vontimamidi village of Thondangi mandal in East Godavari district.

The people affected by the pharma project and members of Left organisations reached the project site from different directions and reportedly set fire to the machinery on the site, where the company was engaged in the ground levelling work for the proposed ₹390-crore project.

East Godavari Superintendent of Police Adnan Nayeem Asmi said that at least 300 protesters were suspected to be involved in the alleged vandalism. They demolished a portion of the protection wall before setting fire to the machinery, including a generator and three motorcycles, on the project site. However, none of the protesters or police personnel on duty was hurt.

The irate protesters reportedly decided to stop the work on the site as they had been continuing a relay hunger strike at Pampalapeta village near the project site, protesting against setting up of the “hazardous project”.

In early December, Divi’s Laboratories had to cancel an official foundation stone-laying ceremony through online by Chief Minister Y.S. Jagan Mohan Reddy, citing a stiff resentment from the local communities against the project.

“We have deployed a battalion of the AP Special Police, 100 personnel from the District Special Party and Seven Deputy Superintendents of Police on the site. The deployment will continue until normalcy is restored,” Ms. Asmi said. A few dozen protesters have been taken into custody.

“The company is assessing the damage and we are investigating to identify the protesters involved in the vandalism,” said Mr. Asmi. Activists of CPI(M), AP Rythu Kuli Sangham, AP Rythu Sangham participated in the protest.