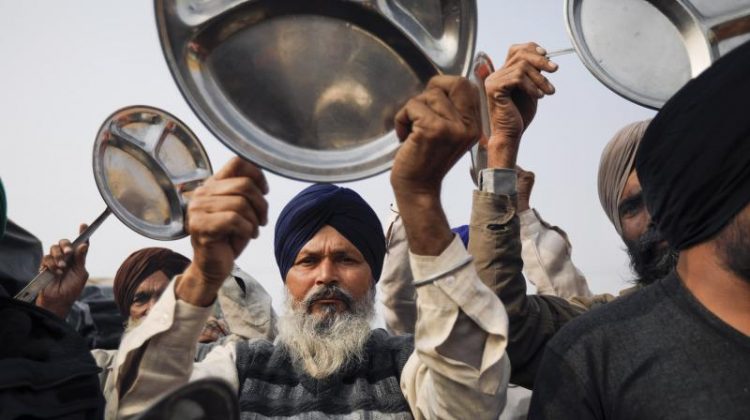 Chandigarh: Farmers on Sunday beat “thalis” at a few places in Punjab and Haryana during Prime Minister Narendra Modi’s ‘Mann Ki Baat’ radio programme as part of their protest against the Centre’s new agri laws.

While addressing a press conference on December 20 at Delhi’s Singhu border, farmer leaders had asked people protesting against the laws to beat utensils during the programme, the same way the prime minister had asked them in March to beat ‘thalis’ (steel plates).

Modi had asked people to express gratitude towards those at the forefront of combating the coronavirus and extending essential services by giving a five-minute standing ovation by clapping, beating plates or ringing bells.

Farmers beat “thalis” during protests at Amritsar, Ferozepur, Sangrur, Talwandi Sabo, Bathinda, Tarn Taran and Gurdaspur districts in Punjab and Rohtak and Jind districts in Haryana, among other places in the two states.

“The common people too are with farmers in their agitation against the farm laws,” said a protester in Amritsar as he beat a “thali” with a spoon and raised “Jai Kisan” slogan.

At many places, farmers, who were joined by people from other sections of society, raised slogans against the BJP-led government at the Centre.

Haryana Bharatiya Kisan Union (BKU) chief Gurnam Singh Chaduni went to the Makrauli toll plaza in Rohtak district along with a group of farmers to protest against the legislations.

They beat ‘thalis’ with shoes during the prime minister’s montly radio broadcast.

“We are here to oppose Modi’s ‘Mann Ki Baat’. We are registering this protest because the prime minister only says what he has to without listening to the voice of the people,” Chaduni said during the protest.

He said feedback has been received from protesting farmers that toll collection on highways in Haryana should be halted till the Centre accepts the demands of the agitating farmers.

Thousands of farmers, mainly from Punjab and Haryana, are protesting against the laws since the last week of November at various border points of Delhi and demanding that the legislations be repealed.

“We went to many toll barriers and farmers who are protesting there said no toll should be charged from people till the government accepts our demands,” the BKU leader said.

Intensifying their agitation against the Centre’s new agri laws, farmers on December 20 had also announced that they will halt toll collection on highways in Haryana from December 25 to 27.

“From December 25 to 27 all toll booths in Haryana will not be allowed by us to collect toll, we will halt them from doing so. On December 27, our prime minister will say his ‘Mann ki baat’ and we want to appeal to the people to beat ‘thalis’ during his address, the same way the PM had asked the country to bang utensils for coronavirus,” the BKU leader Jagjeet Singh Dalewala had said at the press conference.

When the prime minister will speak, “we appeal to the people of the entire country to bang utensils in your houses throughout the duration of his programme to drown out his Mann Ki Baat”, he had said.

Farmers are protesting against the Farmers (Empowerment and Protection) Agreement of Price Assurance and Farm Services Act, 2020, the Farmers Produce Trade and Commerce (Promotion and Facilitation) Act, 2020, and the Essential Commodities (Amendment) Act, 2020.

The three farm laws, enacted in September, have been projected by the government as major reforms in the agriculture sector that will remove middlemen and allow farmers to sell anywhere in the country.