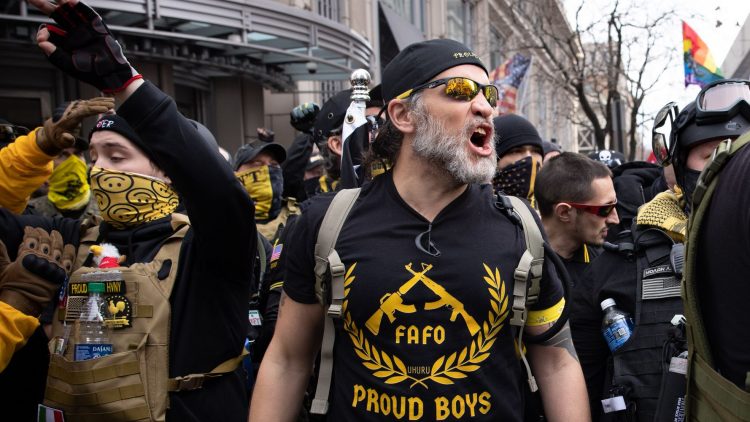 The Washington, D.C., hotel and bar where the white nationalist Proud Boys hang out when they’re in town for protests has announced it will be closed Jan. 6, the day Congress is scheduled to certify the Electoral College vote for President-elect Joe Biden.

It’s also the day of a planned “Wild Protest” in Washington to rail against Donald Trump’s reelection loss. The president is urging his followers to turn out that day in his desperate, last-ditch effort to stay in the White House.

A number of people were stabbed, four critically, near the Hotel Harrington in clashes Dec. 12 between the Proud Boys and counterprotesters at the last demonstration in support of Trump. The Proud Boys are known to stay at the hotel and congregate in Harry’s, the hotel bar.

The 106-year-old hotel, the city’s oldest, issued a statement Sunday saying it will be closed Jan. 4, 5 and 6 for the “safety of visitors and employees.”

It added: “We join with all of our guests, visitors, staff and neighbors in our concern and desire for everyone’s health and safety. We greatly appreciate the trust our guests have placed in Hotel Harrington over the years and we wish to continue to earn that trust. While we cannot control what happens outside the hotel, we are taking additional steps to protect the safety of our visitors, guests and employees.”

DC’s Hotel Harrington, a popular spot for Proud Boys, says it’ll be closed on Jan 6 — the same day as a last-ditch MAGA rally to stop Congress from counting electoral votes. Angry Trump supporters who lost room reservations are fuming on The Donald. pic.twitter.com/Q2rEMlVsjY

The growing Proud Boys’ presence is “unnerving” other guests and staff, many of them Black and Hispanic, according to The Washington Post. The hotel has been cited at least three times in the last few months for violating regulations on social distancing in the bar, according to the Post.

Trump, meanwhile, is rallying his supporters to take to the streets Jan. 6. “Be there,” the president tweeted earlier this month. “Will be wild.”

His tweet, which also claimed, without evidence, that the election was fraudulent, was marked by Twitter as “disputed.”

Peter Navarro releases 36-page report alleging election fraud ‘more than sufficient’ to swing victory to Trump https://t.co/D8KrMHnFdK. A great report by Peter. Statistically impossible to have lost the 2020 Election. Big protest in D.C. on January 6th. Be there, will be wild!