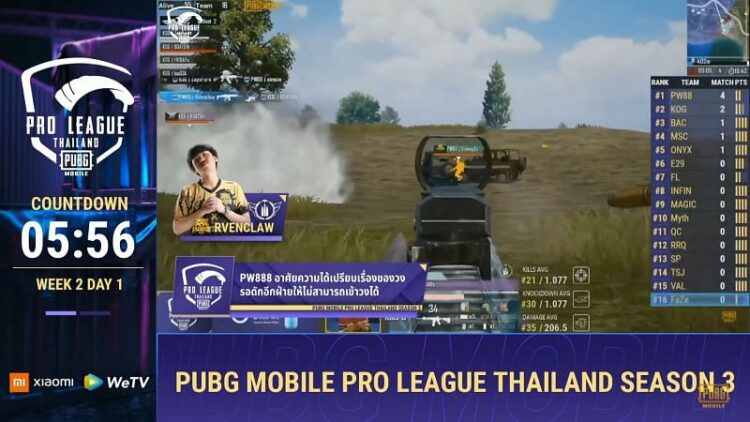 The first day of the second week of PUBG Mobile Pro League (PMPL): Thailand Regular season came to an end today. After an exciting day of play that saw the teams battling it out for a place in the top 16 for the super-weekend, veteran team Made in Thailand (MiTH) emerged as table toppers with 3 chicken dinners.

The team had a total of 103 points which included 48 frags. Following them in second place was E29 Esports Gaming with 46 points and 23 kills. Faze Clan finished third at the end of the day with 27 kills and 45 points to their name.

The first weekday of the second week started with the first match being played on Erangel. This match was won by Made in Thailand (MiTH) with a total of 15 frags to their name. Following them in second place was E29 Gaming Esports with 14 kills in the match. Team Secret Jin(TSJ) finished third with five kills to their name.

The second match of the day, which was also played on Erangel, was again won by Made in Thailand (MiTH) adding a whooping 17 kills to their tally and asserting dominance in the first weekday itself. Afterglow Gaming finished second in this match with seven frags to their name followed by MS Chonburi at third place with five kills.

The third and fourth matches of the day, played on Miramar and Sanhok, were won by Faze Clan and Purple Mood Esports with 14 and six kills to their names respectively. Made in Thailand continued to lead the points table heading into the final match.

Made in Thailand (MiTH) closed the fifth and final match of the day with their third chicken dinner adding a total of 11 kills to their name. Bacon Time finished second in this match with seven frags to their name. The third place in the final match was claimed by E29Esports Gaming with five kills.

On the overall kill leaderboard, Schewpz from Power88KPS continues to be in top place with 28 kills and 6676 damage. Shirty S from E29 Esports Gaming jumped to second place in the kill leaders with 27 kills and 5427 damage, while ArmJone from Team Flash sat at the third spot with 26 kills and 4888 damage.

With two days of weekday play remaining, it would be interesting to see which of the teams finish in the Top 16 and make it to the second super-weekend.