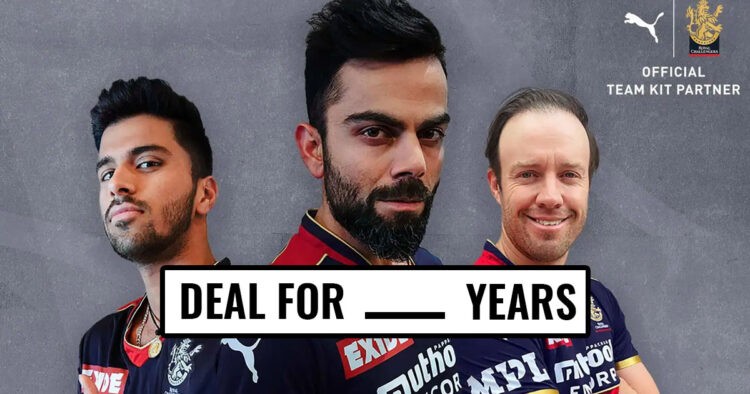 Indian Premier League (IPL) side Royal Challengers Bangalore have signed a multi-year deal with sports apparel brand Puma ahead of the 14th edition of the Indian Premier League (IPL). Under the terms of the deal, Puma will be the official kit partner of RCB from the upcoming season of the league. Incidentally, Bangalore skipper Virat Kohli is also the brand ambassador of Puma.

Bangalore, who will look to end their barren trophy run have begun their training and will look to start IPL 2021 with a bang. Along with a star-studded squad, they have added the likes of Glenn Maxwell, Kyle Jamieson, Dan Christian to their ranks to bolster their squad and bring home the trophy. Royal Challengers Bangalore begin their campaign against the defending champions Mumbai Indians on the first day of the tournament – April 9.

Meanwhile, Virat Kohli sounded extremely excited about the new association. The talismanic run-scorer said that Puma is a brand with a vision that matches their team and they have extensive channels both online and offline which will ensure that fans get access to the merchandise all across the country.

“It’s great to welcome PUMA to the RCB family! A global brand with a strong sporting vision and great quality products, their extensive distribution network through offline and online channels will ensure fans have access to RCB merchandise across the country,” Kohli was quoted as saying in a media release.

Puma will now have exclusive retailing rights to Royal Challengers Bangalore’s takedown and replica jerseys, adding pan-India merchandise reach for the franchise across retail and e-commerce channels. Managing Director of Puma India Abhishek Ganguly also sounded happy to partner with one of the most popular IPL teams.

“We are excited to partner with RCB, one of the most popular teams in the Indian Premier League. Our similar brand ethos coupled with the team’s growing fan base and extensive social following makes RCB our ideal partner on the cricket pitch,” said Abhishek Ganguly, managing director, Puma India, and Southeast Asia.