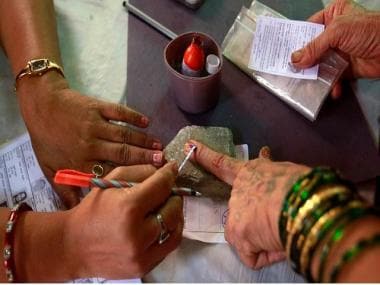 The AAP accused the Congress of booth-capturing in Samana, Rajpura, Dhuri, Abohar and Bhikhiwind, a charge the ruling party denied

On Sunday, voting for eight municipal corporations, and 109 municipal councils and nagar panchayats in Punjab was marred by violence purportedly between the workers of the ruling Congress and Opposition. Meanwhile, over 71.39 percent voting was recorded in the polls.

According to a spokesperson of the Punjab State Election Commission, the highest turnout of 82.99 percent was recorded in Mansa district while the lowest was in SAS Nagar at 60.08 percent.

According to officials, seven people were injured in Rupnagar after workers of the ruling Congress and the Shiromani Akali Dal clashed following a heated argument in ward number one in the city.

In Kapurthala’s Sultanpur Lodhi, an Akali worker was injured in a clash with Congress supporters, PTI reported. The SAD workers reportedly alleged that Congress supporters tried to control the polling booth and that the party’s members fired in the air.

The incident took place when the voting time was about to be over. Supporters of both parties also pelted stones at each other.

In Batala, a BJP leader sustained injuries on the head after a scuffle with some Congress workers, the PTI report added.

Failed on all fronts, Congress party leaders knew they would lose, so they resorted to rigging & booth capturing and even violence. What can we expect from a govt that unleased goondaism in the state? Shame on the State Election Commission for its absolute incompetency!

Punjab BJP chief Ashwani Sharma even staged a sit-in in Pathankot on Sunday evening in protest against the alleged “misuse” of government machinery. The saffron party alleged that their polling agents were “forcibly removed” from some polling booths.

The Aam Aadmi Party (AAP) too accused the Congress workers of indulging in booth capturing in Samana, Rajpura, Dhuri, Abohar and Bhikhiwind, a charge denied by the ruling party.

Leader of Opposition in the Punjab Assembly Harpal Singh Cheema claimed that an AAP volunteer was allegedly shot at in Patti by some Congress activists. However, police rejected the charge.

Candidate Yadwinder Singh Yadu, who was contesting a seat in the Muktsar municipal council, was injured in a clash on the outskirts of Muktsar town on Saturday night, as per News18.

News18 reported that Sudhir Sharma, a supporter of Yadu, was also injured in the incident.

Meanwhile, a tense situation prevailed in Batala after Congress and BJP workers clashed, News18 reported, adding that the situation was brought under control by the police. The Tribune reported that tight security arrangements are in place.

News18 also reported that SAD candidate Parveen Kumar Pinna, who is contesting the Moga municipal corporation election, was “assaulted by unidentified people” outside the Arya School polling booth in the area.

The ensuing poll violence show that @capt_amarinder is a killer of democracy. I demand his immediate resignation. Instead of protecting the people of Punjab he is promoting his goons and suppressing the people’s voices.@ArvindKejriwal@ZeePunjabHH@thetribunechd@htTweets

However, the Punjab Congress hit back at the Opposition parties and said they were making “baseless accusations”.

Punjab Congress chief Sunil Jakhar said, “They (Opposition) do not have any argument against the Congress Party, which is fighting elections purely on the development work done in the state.”

While the SAD and the AAP accused the Congress of misusing the government machinery, the BJP had charged the ruling party of “unleashing hooliganism under the guise of the farmers’ protest”.

A total of 9,222 candidates were in the fray for 2,302 wards of the Abohar, Bathinda Batala, Kapurthala, Mohali, Hoshiarpur, Pathankot and Moga municipal corporations, in addition to the municipal councils and nagar panchayats

EVM snags were also reported in a few places like Ludhiana and Mohali, reports said. Around 7,000 EVMs were deployed for voting, PTI reported.

The State Election Commission (SEC) had set up 4,102 polling stations. Of these, 1,708 were declared as sensitive and 861 as hyper sensitive.

Former allies, the SAD and the BJP fought the municipals elections separately. The SAD had walked out of the National Democratic Alliance (NDA) to registers its opposition to the farm laws last year.

As many as 19,000 police personnel were deputed to conduct free and fair elections, the SEC said. Voters, including elderly citizens, began lining up at the polling booths early on Sunday morning.

Voters were also screened through thermal scanners at polling booths in the wake of the COVID-19 pandemic.

The counting of votes will take place on 17 February.