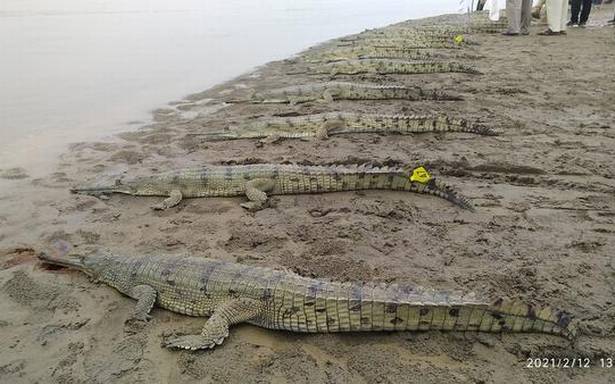 Buoyed by the success of the first phase of rehabilitating critically endangered gharials (Gavialis gangeticus) in the rivers of Punjab, the State Department of Forests and Wildlife Preservation on Friday released 23 captive-bred gharials in the Beas conservation reserve.

Earlier, in 2017-18, during the first phase of ‘Gharial Reintroduction Project’ as many as 47 gharials were released in the Beas conservation reserve in batches in Amritsar and Tarn Taran districts.

Hoshiarpur’s Divisional Forest Officer (Wildlife) Gursharan Singh said 23 captive-bred gharials brought from Morena in Madhya Pradesh were released in the Beas conservation reserve. “A joint team of the wildlife division and WWF-India has been formed for the daily monitoring for next one month,” he said.

A suitable stretch of river Beas near Salimpur and Tahli forest in Hoshiarpur district has been selected for the reintroduction of the current batch.

Geetanjali Kanwar, coordinator – Rivers, Wetlands and Water Policy, World Wildlife Fund-India, told The Hindu that post release monitoring was one of the vital aspects of the gharial reintroduction. “The surveys will focus on understanding dispersal, habitat preference, population ecology and general wellbeing of the released species,” she said.

The ambitious scheme of the Punjab government aspires to establish a breeding population of these critically endangered gharials in the rivers of Punjab.

“In the first phase of this project, 47 juvenile gharials were released in the Beas conservation reserve in batches during year 2017-2018 in Amritsar and Tarn Taran districts. Field surveys conducted, so far, jointly with WWF-India indicate that gharials have dispersed both upstream and downstream of the release sites in the reserve. About 40%-50% of the reintroduced gharials can be spotted in the reserve any time depending on the water levels and season of survey,” said Ms. Kanwar.