Punjab: ‘Soldier’ at farmers’ protest has agencies scurrying to ascertain his ‘true’ identity 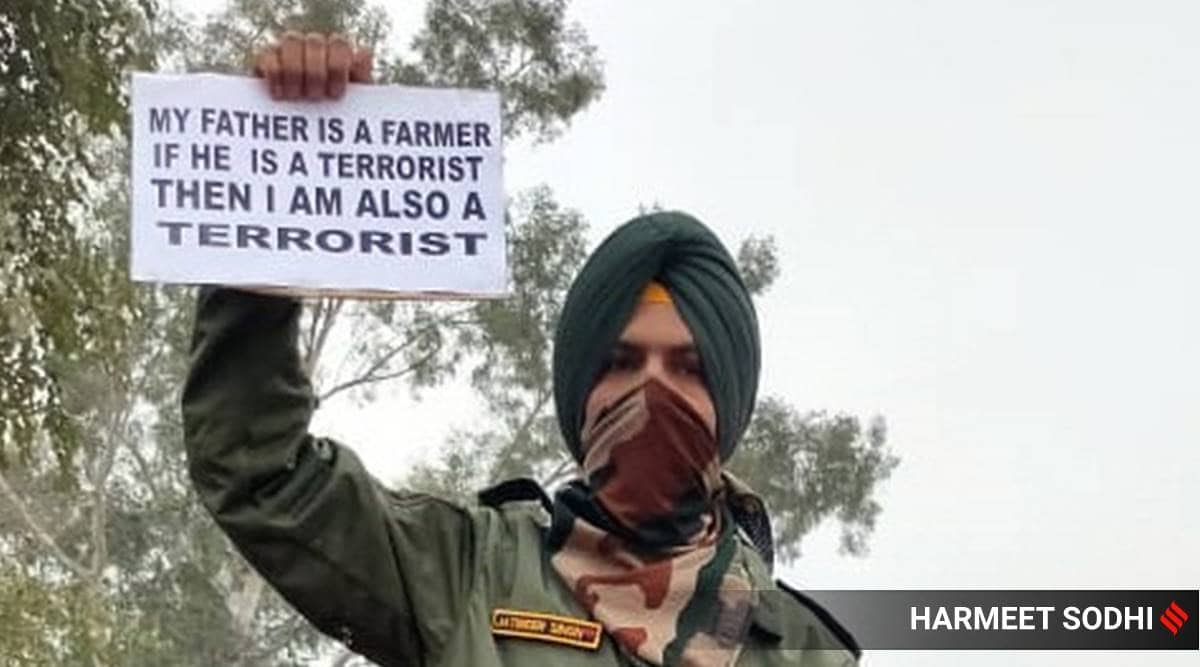 During the protest against farm laws in front of DC Office in Bathinda, Monday. Harmeet Sodhi

The presence of a man in Army uniform participating in the farmers’ protest outside the Deputy Commissioner’s office in Bathinda Monday has now got the intelligence agencies trying to ascertain his true identity and confirm if he is a serving soldier or an imposter.

In photographs, printed in the newspapers and shared multiple times on social media, the Sikh man is seen holding a placard which says “My father is a farmer. If he is a terrorist then I am also a terrorist”. He is wearing a combat pattern uniform with a jacket and a camouflaged scarf wrapped around his face. His attire appears to be the standard Army uniform, which also displays a name tag on the jacket.

Apart from this man, there also is a video circulating on social media in which two Army jawans holding a AK-47 type weapon are speaking with regard to the comments by actor Kangana Ranaut on farmers, which attracted controversy.

In the video, the jawan speaking in Punjabi declares that they too are sons of farmers and will not tolerate anything wrong being spoken about their mothers.

Reacting to the photograph of the ‘jawan’ holding the placard, Lt Gen HS Panag (retd), former GOC-in-C Of Northern and Central Commands tweeted, “Not done. Investigate and take disciplinary action”. He further tweeted, “Army has clear rules and regulations. No compromise”.

Multiple sources said that there has been considerable apprehension in official quarters about the impact of the farmers’ agitation on the military personnel and that there are strict rules and regulations which forbid any such participation in protests. “We are trying to ascertain if this youth who has been photographed wearing Army uniform is in reality a soldier or not. While we cannot do anything about ex-servicemen taking part in the agitation, yet any such behaviour by serving personnel cannot be condoned and will invite strict punishment,” an Army officer disclosed on condition of anonymity.

Many ex-servicemen organisations in Punjab have started taking active part in the protests taking place on the borders of Delhi. While a section of the ex-servicemen associations have announced to return their medals, some of the veterans’ associations office bearers spoken to denied that they had any such intention.

Havildar Bhola Singh of Ex-servicemen Welfare Union, Bathinda, said that his organisation has no plans to return their medals. “I have just returned from the dharna at the Tikri border. We are sending jathas (groups) of 20 ex-servicemen everyday to take part in the protests. However, we have not decided to return our medals. The decision seems to have been taken by some group which is associate with some political party,” he said.

When asked if his organisation had plans to return medals awarded to them in solidarity with farmers, Capt Jaspal said that there were no such plans. “Why should we return our medals? We have earned them. We sat in sub zero temperatures in high altitude and got these medals. No politician was sitting there. We will rather force the government to accept our demands,” he said.

According to Lt Col SS Sohi (retd), chairman of Ex-Servicemen Grievances Cell, Mohali, the veterans are not only peeved at the manner in which the farmers are being treated by the Centre but also at the recent spate of orders of the Chief of Defence Staff General Bipin Rawat.

“Recently the CDS has proposed to increase the service of soldiers and also to reduce the pension by 50 per cent by one estimate. This affects the morale of the soldiers and the veterans and we oppose it. You cannot treat your troops in this manner and you also need young Army to take on the enemy. If Gen Rawat’s proposals are accepted the government will be weakening our armed forces and taking a big risk for national security,” he said.