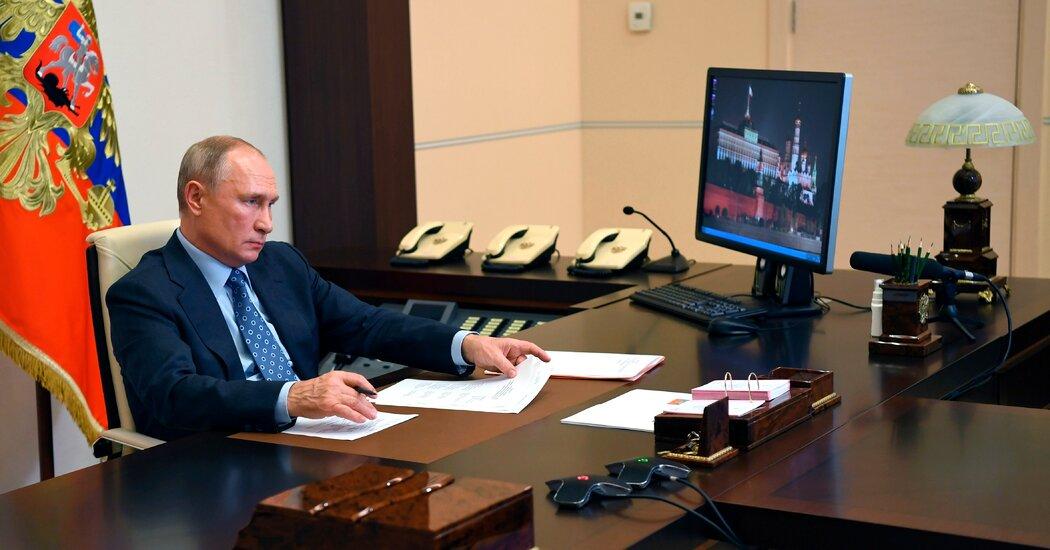 MOSCOW — President Vladimir V. Putin of Russia congratulated Joseph R. Biden Jr. on Tuesday on having won the American presidential election — more than a month after the Democrat became the U.S. president-elect.

Mr. Putin’s long delay in offering congratulations, while President Trump has refused to accept the election results, was widely viewed as a prelude to a frosty relationship between the Kremlin and Mr. Biden’s White House. On Tuesday, after the Electoral College confirmed Mr. Biden’s victory, the Kremlin ended its wait and announced that Mr. Putin had sent the former vice president a “congratulatory telegram” marking his “victory in the United States presidential election.”

“Vladimir Putin wished the president-elect every success and expressed confidence that Russia and the United States, which bear special responsibility for global security and stability, can, despite their differences, effectively contribute to solving many problems and meeting challenges that the world is facing today,” the Kremlin’s statement said.

Mr. Putin had been one of the last major holdouts among world leaders in sending Mr. Biden the sort of congratulatory message that is routine in international diplomacy, even among adversaries. China congratulated Mr. Biden on Nov. 13, 10 days after Election Day.

However, Mr. Putin was not alone in withholding good wishes, with some of Mr. Trump’s closest allies overseas taking a wait-and-see approach. These included Poland’s right-wing government, with President Andrzej Duda waiting until this week to offer his congratulations.

“After the election of the Electoral College, I would like to congratulate you on the successful election result and wish you a successful term of office,” Mr. Duda said in a statement. “Relations between Poland and the U.S.A. are a pillar of security, European and trans-Atlantic stability.”

The Kremlin had said that since Mr. Trump had not conceded, it was waiting for an “official announcement” of the American election result. The delay in recognizing Mr. Biden as president-elect also allowed Russian state media to underline, for its domestic audience, what it cast as the chaotic and illegitimate nature of American democracy.

But the Kremlin also recognizes that it will need to work with Mr. Biden — not least on nuclear arms control, with a major treaty limiting American and Russian nuclear warhead numbers expiring on Feb. 5. Both Mr. Biden and Mr. Putin have signaled that they would like to extend the treaty, but they will not be able to make it official until after Mr. Biden is inaugurated on Jan. 20.

“Russian-American cooperation based on the principles of equality and mutual respect would respond to the interests of the peoples of both countries and the entire international community,” Mr. Putin told Mr. Biden, according to the Kremlin.

Mr. Putin added: “For my part, I am ready for interaction and contacts with you.”

Mr. Biden, however, has promised to take a tougher line on Russia than did Mr. Trump. Underscoring the tensions, American officials acknowledged on Monday that the State Department and parts of the Pentagon were among the government entities compromised by a sophisticated Russian hacking attack.

Mr. Biden will also need to decide how to respond to mounting evidence that the Russian government was behind the poisoning in August of Aleksei A. Navalny, the country’s most prominent opposition leader, with a military-grade nerve agent. Officers from a Russian spy unit with expertise in poisons trailed Mr. Navalny for years and were nearby when he was poisoned, a team of investigative journalists reported on Monday.

“The mode of attack leaves no doubt as to where the responsibility lies — the Russian state,” Mr. Biden said of the Navalny poisoning in September, criticizing Mr. Trump for inaction. “As president, I will do what Donald Trump refuses to do: work with our allies and partners to hold the Putin regime accountable for its crimes.”