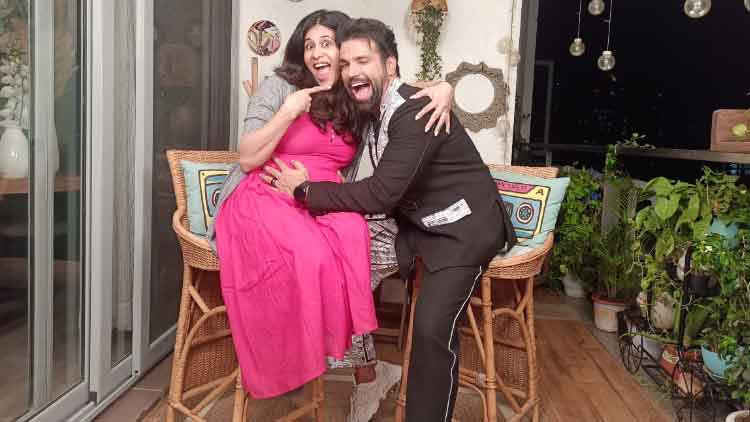 The multi-talented Rithvik Dhanjani and Kishwer Merchant were finally seen together on screen in a completely different and informal format compared to their previous outing. To refresh your memories, the two shared screen spaces in the iconic TV show Pyar Kii Yeh Ek Kahani were at loggerheads.

However, many know that Kishwer and Rithvik share a close strong bond off-screen. Therefore, Rithvik landed at Kishwer’s place and the two ended up having a conversation about ALTBalaji’s thriller entertainer Cartel, Ekta Kapoor and Supriya Pathak.

In a video published on Kishwer Merchant’s YouTube channel, Rithvik spoke about the many aspects of Cartel. When asked about how Rithvik worked on his accent for his character Abhay, Rithvik mentioned that he was introduced to a real-life Abhay, with who he spent two hours.

Rithvik went as far as to record the conversation he had with the real-life Abhay to pinpoint and learn the accent, including the slang and tone of his voice.

While speaking about the cast, Rithvik also revealed how star-struck and inspired he was when he saw the veteran actress Supriya Pathak on set playing the character of Rani Maai. He also went on to tell Kishwer that the show was shot for 2 and a half years and lauded the director for holding everything together and never giving up on what is!

ALTBalaji’s largest project yet in terms of its scale and vision. Both the actors tagged Cartel as “The Mughal-E-Azam” of today’s times. Rithvik emphasized the scale of the show, saying, “It was an incredible experience working on this Magnum-Opus series and I have so much respect for the director for holding his ground while working on a show which featured 138 actors with speaking parts over 122 days.”

The excitement that Rithvik had for the release was very clearly visible on his face. The actor has been passionately waiting for the viewers to finally be able to watch the series.

ALTBalaji’s Cartel is an action drama that is set in present-day Mumbai. The show revolves around the challenges and obstacles faced by The Angre Family after an attack changes the fate of their house.

Keeping the audiences’ excitement in mind, makers have also planned to drop the series right at 00.00 on August 20. Yes, you read that right.