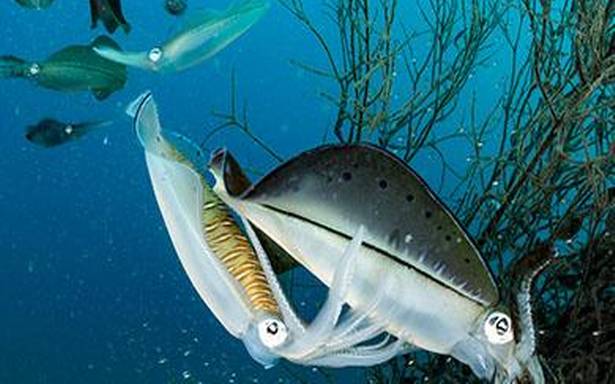 Squids adeptly change the colour and patterns on their skin for camouflage and communication. Like their cephalopod cousins the octopus and cuttlefish, Squids have specialised pigment-filled cells called chromatophores that expand to expose them to light, resulting in various shades of pigmentary colour. Squids shimmer and flicker, reflecting different colours and breaking light over their skin. Researchers have found that proteins called reflectins are responsible for their iridescence. Now, researchers from the University of California, Santa Barbara, have found (Applied Physics Letters) what allows squids to tune the reflected light.

Daniel Morse’s team from the University had already found that structures (subwavelength-wide grooves) and mechanisms by which light-reflecting cells (iridocytes) in the skin can take on virtually every colour of the rainbow.

The grooves are formed by a cell membrane that folds into nanoscale accordion-like structures called lamellae. The colour reflected depends on the width of the groove, which corresponds to certain light wavelengths (colours).

The width of the grooves can be changed – widened or narrowed – at will by the action of “osmotic motor” driven by reflectin proteins. The researchers then found that the reflectin proteins can not only tune the colour but can also tune the brightness using the same mechanism.

Reflectins are normally very strongly positively charged and so they repel each other. But neural signal causes the reflectins to bind to negatively charged phosphate groups that neutralize their positive charge. Without the repulsion they fold and attract each other, accumulating into fewer, larger aggregations in the lamellae.

Aggregations of the reflectins exert osmotic pressure on the lamellae causing water release from the cells. The release of water in turn collapses the accordion so the thickness in spacing between the folds gets reduced. This causes the light that is reflected to shift progressively from red to green to blue, says a release. At the same time, the membrane’s collapse also concentrates the reflectins, causing an increase in their refractive index, amplifying brightness.