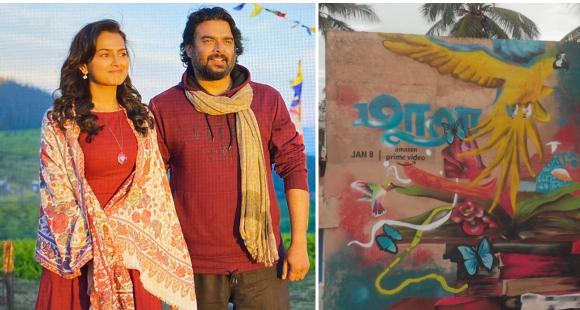 Through wall art in and around Tamil Nadu, the Chennai-based artists have not only beautified the town but have also brought out the essence of Maara.

Maara starring R Madhavan and Shraddha Srinath in the lead roles was released on January 8 and it opened to a positive response from the audience and critics alike. The film released on Amazon Prime India and managed to win the hearts of the audience. R Madhavan and Shraddha”s magical chemistry has managed to grab the attention. Taking the audience into a magical world filled with paintings, picturesque locations and captivating stories, Maara has emerged as the feel-good movie that everyone had been waiting for.

The magic of film continues and is spreading across the streets of Chennai and Coimbatore, thanks to Chennai-based artists, Chris Blair Vincent of Silver Brush Studio and Lotuz Head. Through wall art in and around Tamil Nadu, the Chennai-based artists have not only beautified the town but have also brought out the essence of Maara. As the movie is all about Maara, aka R Madhavan, whose presence is like a breeze, always beautifying the lives of people in his village and the world at large, the artists’ work is a fitting tribute to the movie.  Additionally, street installations were artistically prepared with the help of local artists. Also Read: R Madhavan gives an EPIC response to a netizen who calls him a ‘show spoiler’ in Maara; Wins hearts yet again