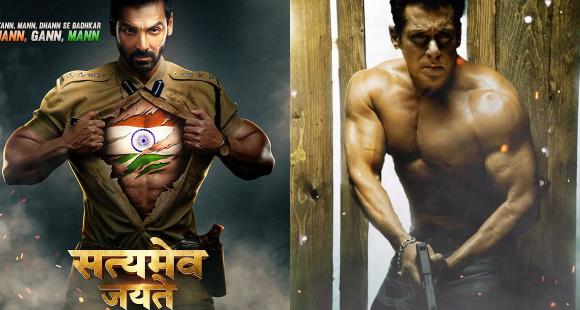 It’s Salman Khan vs John Abraham this Eid, as Satyameva Jayate 2 is confirmed to release alongside Radhe. But is this bleeding industry in the position to afford a clash right now?

John Abraham unveiled a Republic Day surprised by putting out his look from the Milap Zaveri directed Satyameva Jayate sequel and captioned it, “See you this EID”, thereby yet again confirming the clash of his sequel to the 2018 commercial action entertainer with Salman Khan’s Radhe during the festive weekend. While there were speculations in the trade circles early in January that Satyameva Jayate 2 might arrive a couple of weeks before or after the Eid weekend, John made a statement that he is staying on the already announced date.

This news of clash has grabbed the eyeballs of the trade as also the cinema lovers on social media. But is a clash feasible inthe midst of this pandemic, where despite-controlled cases, there is still a certain amount of fear, particularly in the metros and with lack of disposable income in hand, watching a film (In Hindi belts) will be the least of priorities. The 50% capacity cap is still intact, and so far, it’s rather unlikely for the government to allow cinema halls to operate at optimum capacity until May, given the fact that states like Rajasthan are yet to open up their cinema halls. If the cinema halls open up to 100% capacity, the discussion would end here itself, and the films would have enough screens in hand to go and grab the eyeballs.

But as of today, a film releasing with 50% capacity cap is already in the backfoot, as the business prospects would face the brunt by at-least 30% and add the fear psychosis impacting the BO by another 20%. If we add on another limitation of screen and show sharing with existing issues of the 50% capacity cap and coronavirus pandemic, the films would have the ground to merely reach 25 to 30% of their real potential. And this doesn’t make sense, as both Radhe and Satyameva Jayate have a lot to lose and a lot at stake. Interestingly, both the films are keenly awaited by the trade as they can set the ball rolling for the single screens in tier 2 and tier 3 cities.

One can’t be ignorant in addressing the aspect that both the films would not be able to reach their true potential of business, particularly in times like these.

The first Satyameva Jayate clashed against Gold during the Independence Day weekend and the success set the platform to spin it into a franchise with John taking on the system as a vigilante. However, back then, the different on-ground scenario aside, the different target audience was also a factor which let both the films sustain. While Gold was primarily a multiplex centric film, Satyameva Jayate catered to the masses. But in case of Radhe and Satyameva Jayate, the films are aimed at the same audience, i.e. the masses. Without any doubts, Salman is a much bigger star and has an upper hand in the clash in terms of in terms of initial as also the lifetime, one can’t be ignorant in addressing the aspect that both the films would not be able to reach their true potential of business, particularly in times like these.

Another question arises here, as to who could make the move, in case the clash is to be averted? John Abraham and the team of Satyameva Jayate 2 were the first to announce that they would arrive on the Eid weekend, thereby making the first move to capture the weekend, and this is a point that holds valid ground. The first Satyameva Jayate succeeding against competition would also give the team some sort of confidence. But, over the years, Salman has been synonymous to the Eid weekend, and it’s always implied that one of his releases would come during the festive weekend. That aside, Radhe is a film that was supposed to arrive on Eid last year, and due to unforeseen circumstances had to be delayed. If not for Radhe, another Salman film, Kabhi Eid Kabhi Diwali was slated for an Eid 2021 opening. So, it’s a catch 22 situation and a call that both the producers and other stakeholders of the films should sit down take in the best interest of both their films, to make sure neither of them suffer.

Salman Khan’s last films have not done as well as expected, but still, he is Salman Khan. No Bollywood actor can take a bigger opening than him in today’s time

A clash in the midst of pandemic, in the time when industry is bleeding is the last thing that the trade and exhibition sector would want. “Salman Khan’s last films have not done as well as expected, but still, he is Salman Khan. No Bollywood actor can take a bigger opening than him in today’s time. So, he would have a priority in terms of screen count and showcasing. But, on the positive side, two films might be able to sustain on Eid, though neither would reach their true potential. Even Satyameva Jayate 2 is catering to the same audience as Radhe,” said Raj Bansal, a top distributor from Rajasthan.

Vishek Chauhan, an exhibitor from Bihar, agrees to Raj Bansal and believes that both, Satyameva Jayate and Radhe are anticipated films. “Satyemeva Jayate was a big film and part two is going to be even bigger. So, if Radhe is a potential Rs 250 crore film, Satyameva Jayate 2 comes with a potential of Rs 150 crore. So many single screens have walked out of the business, so there is going to be a scarcity of screens and in that scenario, I am afraid, that single screen exhibitors might have to face a lot of bulling from both ends in the attempt to get more screens and shows,” Vishek shares.

I am afraid, that single screen exhibitors might have to face a lot of bulling from both ends in the attempt to get more screens and shows

He adds, “Coming on the same day will definitely cannibalize business and it is not in the larger interest of trade, especially in the times when exhibitors are crying. To potential big films on the same day will lead to both the films losing out on money. Even the exhibitors tend to lose, as they will have to choose to screen one of the two films. They might have screened both Radhe and Satyameva Jayate and earned money. Ideally clashes should be avoided but if you are going to clash, would advise distributors of both films to sort out showcasing, especially for Single screens and inform state offices as in the end it tends to get ugly.”

Also Read| Mirroring the Industry: Sooryavanshi and Radhe in cinemas, but why is Bell Bottom exploring an OTT release?

RELATED:  Watch Star Studded United We Serve A Celebration of the National MLK Day of Service Held By The Biden Administration