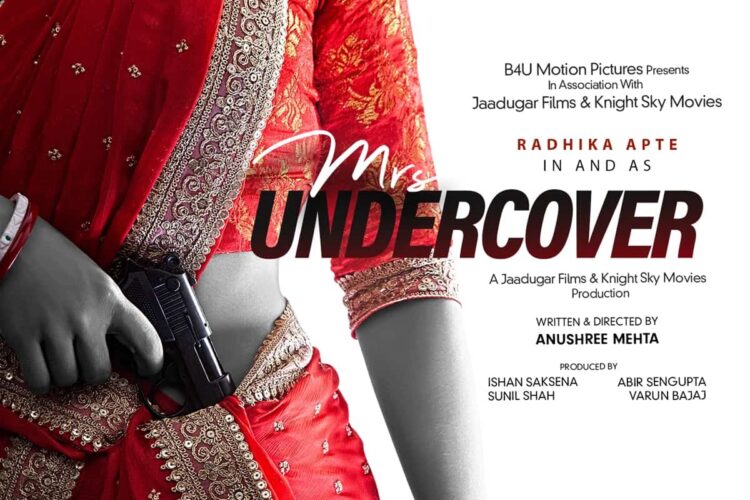 People say that the first impression is the most important one and it could not be truer. The adage has been proven right once again as debutant director Anushree Mehta’s upcoming film, ‘Mrs Undercover’ raises the curiosity levels of the audience.

Starring Radhika Apte in the lead, the first look poster of ‘Mrs Undercover’ is launched by the makers on the auspicious occasion of Holi. The poster indicates the interesting dichotomous combination of an Indian housewife holding a gun. This first look intrigues the viewers quite a bit as the talks about the potential of a power-packed entertainer gracing the silver screen.

Director Anushree Mehta talks about the film and shares, “It is surreal to take this initial step and share the first look of our film with the world. We believe in giving quality content to the viewers and have tried very hard to achieve that with Mrs. Undercover. The title, the poster, the imagery is a long-thought process to make people excited. This project is a special one for me and I am so glad that I found an actor like Radhika Apte to play the titular character. Looking forward to seeing how the audience will react to the forthcoming glimpses we have of the film.”

Leading lady Apte shares about her character and the first look. She says, “Anushree came to me with this film some time back and the novelty of the story had me excited. When I saw this first look, it was that same excitement I felt and it was not only as someone who is a part of the film but also as a member of the audience. I think we all wanted to show the essence of the film through this first poster and I must say that we have captured it well. Now, I am waiting to see what the audience has to say about this special film of ours.”

Presented by B4U Motion Pictures and Jaadugar Films & Knight Sky Movies, ‘Mrs Undercover’ starring Radhika Apte marks the directorial debut of writer-director Anushree Mehta. Abir Sengupta; who directed the Kiara Advani starrer ‘Indoo ki Jawani’, turns producer with this film where he partners with Ishan Saksena and Sunil Shah who have produced films like ‘Pataakha’ and ‘Baazaar’, and Varun Bajaj who has produced the Abhishek Bachhan starrer ‘All is Well’.