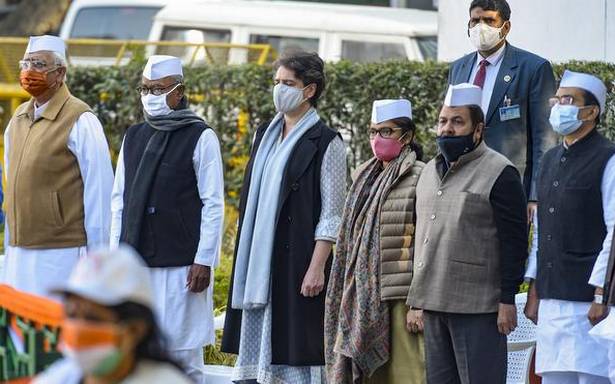 Sonia also absent as she has been avoiding public appearances due to the pandemic and Delhi’s smog and pollution.

As the BJP questionedg Mr. Gandhi’s “seriousness” as a political leader, the Congress came to his defence, stating that he had gone to meet an ailing relative and his maternal grandmother in Italy.

Ms. Sonia Gandhi has been avoiding public appearances because of concerns over the COVID-19 pandemic as well as Delhi’s smog and pollution.

The timing of Mr. Gandhi’s foreign visit raised eyebrows as it was not only just a day before the party’s Foundation Day but also barely 10 days after the much publicised meeting of Ms. Gandhi and key members of the group of 23 dissenters (G-23).

Among several key demands to revamp the Congress, having a “full time and visible” leadership was prominently mentioned by G-23 in their letter to Ms. Gandhi in August.

While party chief spokesperson Randeep Surjewala had claimed that 99.9 % of the workers want Mr. Gandhi back as their chief, he didn’t clear his stand on the issue.

“He has not gone on a vacation,”said Mr. Surjewala, adding, “Can’t a person go to meet a relative who is severely unwell? He will also be meeting his maternal grandmother at the end of the year”.

Other senior leaders, including party general secretary Priyanka Gandhi Vadra, were present at the brief event.

Though Ms. Vadra spoke to reporters, she sidestepped the question about Mr. Gandhi’s absence, and focussed only on the issue of ongoing farmers’ agitation.

“I had told you the other day as well that the government needs to listen to the voices of farmers. To say that this agitation is a political conspiracy is absolutely wrong. And I think the kind of language that is being used for farmers is a sin,” Ms. Vadra said, referring to some BJP leaders, including Ministers, calling the farmer ‘Khalistani’, traitor and a part of the ‘tukde tukde’ [break-up India] gang.

“Our jawans are also the sons of the farmers. Jawans are standing at the borders for us and our farmers are ‘annadaata’ [food givers]. The government has a responsibility towards farmers. They must listen to farmers and take back the laws they enacted,” she added.

Despite his absence, Mr. Gandhi tweeted on the farmers’ issue. “The country can never become self-reliant without the self-reliant farmer. Take back the anti-agriculture laws. Save farmers, save the country!”, he said.

Party general secretary (organisation) K.C. Venugopal later went to Jantar Mantar — site where party MPs from Punjab are protesting over the farm laws — to express solidarity with the farmers’ agitation.

Several other senior leaders, both loyalists of the Gandhi family as well as a few key members of the group of 23 dissenters (G-23), including Ghulam Nabi Azad and Anand Sharma, were present at the party event.