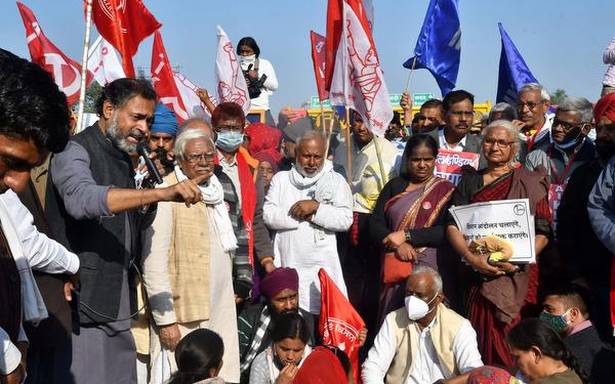 Swaraj Abhiyan chief Yogendra Yadav and others went on a day-long hunger strike, seeking the repeal of farm laws.

The Rajasthan farmers protesting against the Centre’s new farm laws continued to block the Delhi-Jaipur national highway at Shahjahanpur in Alwar district on Monday as police stopped them from marching towards Delhi.

With the police stopping them from proceeding towards the national capital along the State’s border with Haryana, the farmers camping at Jaisinghpur-Khera border in Shahjahanpur under the leadership of Swaraj Abhiyan chief Yogendra Yadav and others went on a day-long hunger strike, seeking the repeal of farm laws.

With the Rashtriya Swayamsevak Sangh affiliates Swadeshi Jagran Manch and Bharatiya Kisan Sangh too raising the demand for a legal guarantee on the MSP recently, Mr. Yadav dared RSS to clarify its stands on the farm laws.

“I have one simple question to RSS-affiliated BKS and SJM. Do they support the farm laws in the existing form? Let them come clear on this,” said Mr. Yadav, addressing reporters.

He claimed the two right-wing organisations were not in favour of the farm laws since day one. But with the pressure building upon the RSS amid the farmers’ agitation, they have now started saying that some amendments are required.

Both the organisations, SJM and BKS, have said the Centre’s farm laws favour farmers but they need some amendments to allay their fears over the MSP.

“We are holding a day-long fast today to pay tribute to the farmers who lost their lives during the country-wide agitation. This fast is being held to give a message that God give wisdom to the government,” said Kisan Panchayat president Rampal Chaudhary, who is also camping on the highway.

Due to blockade, vehicular traffic on the Jaipur-Delhi highway is being diverted to Bansur and other routes of Alwar, police said.

One-way traffic from Delhi to Jaipur is open but the Jaipur-Delhi traffic is blocked due to the agitation, they said.

The police are keeping a vigil on the border areas.

Thousands of farmers are currently camping at Delhi’s borders with Haryana and Uttar Pradesh in protest against the Farmers’ Produce Trade and Commerce (Promotion and Facilitation) Act, 2020, the Farmers (Empowerment and Protection) Agreement on Price Assurance and Farm Services Act, 2020 and the Essential Commodities (Amendment) Act, 2020.

They have expressed apprehension that these laws would pave the way for the dismantling of the minimum support price system, leaving them at the “mercy” of big businessmen.

The government has been maintaining that the new laws will bring farmers better opportunities and usher in new technologies in agriculture.