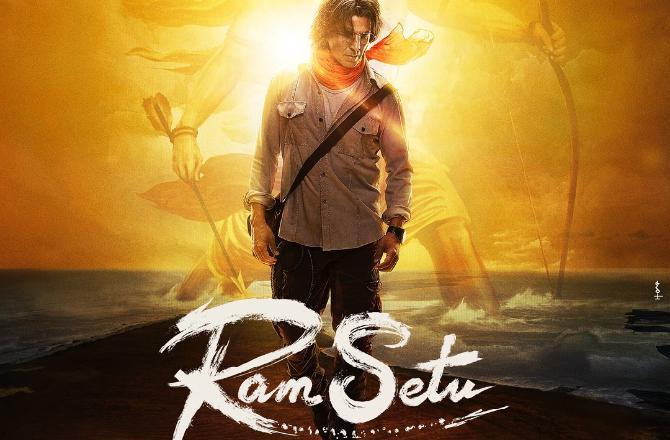 Akshay Kumar gave a Diwali gift to his fans by announcing his new project. The actor also revealed his first look from the film. Titled Ram Setu, the tagline of the film is ‘Myth or Reality?’

In the poster, the actor is seen in a longish hairdo wearing a grey t-shirt, a blue denim shirt, and black cargo pants with a small bag around his shoulder.

Sharing the poster on his Instagram account, the actor wrote, “This Deepawali, let us endeavour to keep alive the ideals of Lord Ram in the consciousness of all Bharatiyas by building a bridge (setu) that will connect generations to come. Taking this mammoth task ahead, here is our humble attempt – RAM SETU! Wishing you & yours a very Happy Deepawali! #RamSetu #AbhishekSharma #CapeOfGoodFilms @abundantiaent @ivikramix #DrChandraprakashDwivedi (sic)”.

Akshay also shared another poster of his upcoming film. The poster also has a photo of Lord Ram in the background.

On the work front, Akshay was last seen in Laxmii. The film revolves around the life of a man who is possessed by not one or two, but as many as three spirits. The film also stars Kiara Advani. Released on November 9, Laxmii opened to mixed reviews from the audience.

Apart from this horror-comedy, Kumar is also gearing up for films like Sooryavanshi, Prithviraj, Bachchan Pandey, Atrangi Re, Bell Bottom, and Raksha Bandhan.