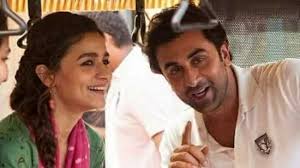 Ranbir Kapoor and Alia Bhatt have got to be one of the most talked about couples in Bollywood. Kapoor and Bhatt will be next seen in Ayan Mukerji’s Brahmastra. Now, pictures of the two actors looking absolutely in love at an ad shoot are making the rounds on social media.

Kapoor and Bhatt were reportedly shooting with Gauri Shinde for a chips brand. Bhatt takes the traditional route in the shoot and is dressed in a green kurta with a pink dupatta. Her hair is done up in a braid.