Home EntertainmentBollywood Ranbir Kapoor: My girlfriend Alia is a bit of an overachiever

Ranbir Kapoor: My girlfriend Alia is a bit of an overachiever 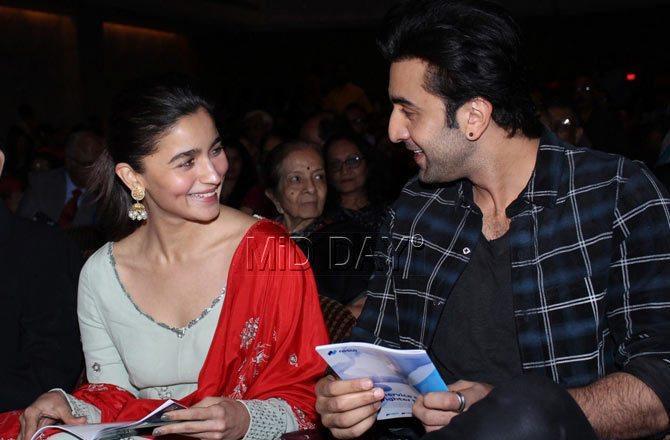 It’s no secret that Ranbir Kapoor and Alia Bhatt have been in a relationship for quite some time now. While both the actors are pretty private about their lives, their frequent public appearances together speak volumes about their relationship.

In a recent interview with Rajeev Masand, Ranbir Kapoor finally opened up a little about girlfriend Alia Bhatt and their impending wedding. When asked about the COVID-19 lockdown and whether he took any online classes during the long break, Kapoor said, “My girlfriend Alia is a bit of an overachiever, and she probably took every class there is — from guitar to screenwriting. I always feel like an underachiever next to her.”

He added, “But no, I didn’t take any classes. Initially, we were dealing with the family crisis, and then I got into reading, spent time with my family, and I watch two-three films every day.”

Speaking about his much-awaited wedding with Alia, Ranbir shared that the wedding could’ve taken place already had the pandemic not hit. “I don’t want to jinx it by saying anything. I want to tick mark that goal very soon in my life,” he said.

There was news that Alia and Ranbir had moved in together during the lockdown, and that now, Alia has even bought a flat in Ranbir’s apartment complex. According to a report, the building is situated in the Pali Hill area in Bandra, where Kapoor stays on the seventh floor. The Sadak 2 actress is going to reside on the fifth floor and the apartment has cost her around Rs 32 crore.