Home EntertainmentBollywood Ranbir Kapoor on father Rishi’s death: I am still, in some ways, dealing with that

Ranbir Kapoor on father Rishi’s death: I am still, in some ways, dealing with that 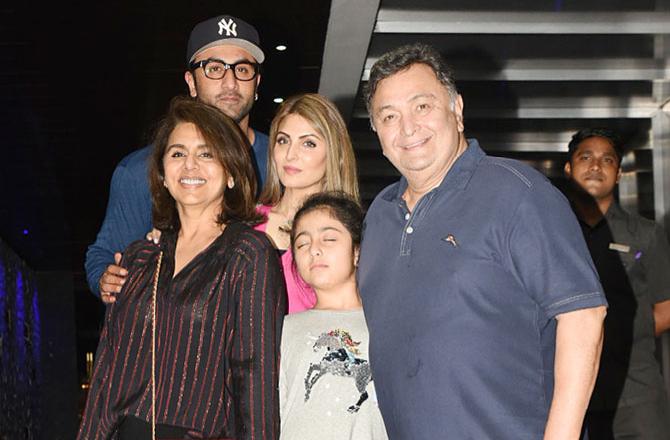 One of the biggest tragedies Bollywood suffered this year was actor Rishi Kapoor’s death. The veteran star left us for heavenly adobe on April 30 after a two-year battle with leukaemia. Rishi wasn’t just a phenomenal actor but also a very lively and lovable human. As exhilarating as his on-screen persona, his real-life demeanour was just as entertaining. Apart from daughter Riddhima Kapoor Sahani, and wife Neetu Kapoor, Rishi’s death left his son Ranbir Kapoor bereaved.

In a recent interview, Ranbir remembered his father and talked about how life has been without him. Opening up on dealing with his father’s loss in an interview with Rajeev Masand, Ranbir said, “Well, I think there’s only been time for that. It’s been quite a big year in my life starting with losing a parent which I don’t think has seeped in yet. Still in some ways dealing with that. Of course with the pandemic, my mother herself tested positive..so many things happened in this year. But yes, I have had good time to reflect on things.. to reflect on my personal, professional life. Where acting is concerned, of course I miss it. I just hope I haven’t forgotten it (smiles) It’s been quite sometime since I have been in front of the camera but it’s like riding a cycle. Once you’re on it.. it just takes some time and then you’re at it.”

Ranbir said that Rishi impacted his life ‘in every which way’. “I am still, in some ways, dealing with that. Just the time I spent with him in these last two years, before he passed, walking with him from the hotel to the hospital while he was getting his chemotherapy, just walking in silence and being around him… Everything has gone so fast. I don’t know if I have really formed words yet about what impact he has had on me, professionally and personally, but I do know that it’s the largest impact a human being has had on my life so far,” he added.

Ranbir further went on to talk about how his father Rishi Kapoor helped him both professionally and personally. “I think the person I am is because of the strong value system that he imbibed in my sister and me. He was an extremely passionate man, a family man,” he said.

Also Read: Cherished for a lifetime! Rishi Kapoor’s photo album will bring a smile to your face

In the same interview, Ranbir also spilled beans on his relationship with Alia Bhatt. Kapoor said, “My girlfriend Alia is a bit of an overachiever, and she probably took every class there is — from guitar to screenwriting. I always feel like an underachiever next to her.”

Speaking about his much-awaited wedding with Alia, Ranbir shared that the wedding could’ve taken place already had the pandemic not hit. “I don’t want to jinx it by saying anything. I want to tick mark that goal very soon in my life,” he said.

There was news that Alia and Ranbir had moved in together during the lockdown, and that now, Alia has even bought a flat in Ranbir’s apartment complex. According to a report, the building is situated in the Pali Hill area in Bandra, where Kapoor stays on the seventh floor. The Sadak 2 actress is going to reside on the fifth floor and the apartment has cost her around Rs 32 crore.