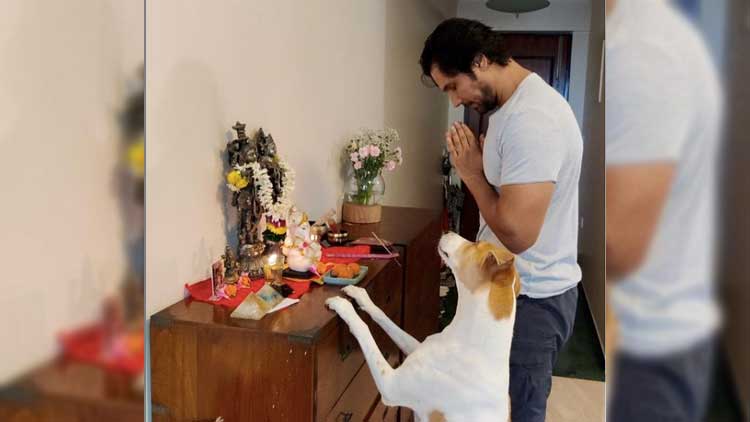 We have often heard the saying ‘Dogs are the most faithful animals to humans’. Once they start living with you, they somehow become the most important part of your family. Actor Randeep Hooda’s love for animals is known to all. The actor has now shared a cute picture with his dog Bambi which is winning hearts of the people.

Sharing the photo with his dog Bambi, he wrote,”Sanskari Dog alert ! #Bambi”

In the photo, we can see Randeep with joined hands praying to God. But what catches the attention is his dog also standing alongside him and praying with him. Bambi is an adopted Indie dog. Looks like Randeep has trained him too well!

The actor is a known animal lover and he frequently tries to bring awareness amongst people against animal cruelty. He is often seen writing to the government about wildlife conservation.

On the workfront, the actor will  be seen in ‘Unfair & Lovely’ which is a social comedy film directed by Balwinder Singh Janjua. It stars Ilena D’Cruz opposite him and is based on the obsession of Indian’s with fair skin.  He will also be seen in ‘Rat on a Highway’ which is directed by Vivek SIngh Chauhan.

The actor will also be seen in a web series titled ‘Inspector Avinash’ which is based on the real-life experiences of police officer Avinash Mishra. It is directed by Neeraj Pathak.