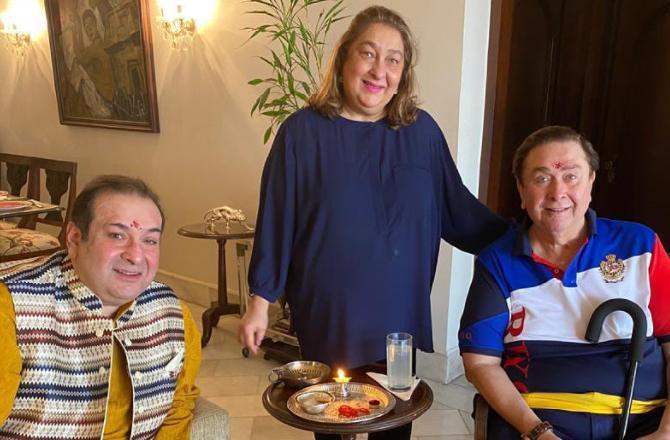 The Kapoor family lost two of their own this year – Ritu Nanda and Rishi Kapoor. Ritu Nanda passed away in January 2020, while Rishi Kapoor in April 2020. Both were children of the late Raj Kapoor, and siblings of Randhir Kapoor, Rima Jain and Rajiv Kapoor.

Veteran actor Randhir Kapoor celebrated Bhai Dooj this year with Rima and Rajiv, but also missed having siblings Rishi and Ritu around. Sharing some photos from the festivities, Randhir Kapoor wrote on Instagram, “Missed Ritu & Chintu at Bhai Dooj!”

Randhir Kapoor’s elder daughter, Karisma, was all hearts for the post. Fans of the actor also commented on the post; one of them wrote, “The photo and Bhai Dooj of this year is incomplete without Rishi ji & Ritu ji” while another Instagram user said, “Major missing rishi sir.”

The siblings celebrated Bhai Dooj at Rima Jain’s house, and were also joined by Armaan and Aadar Jain.

Armaan and Aadar Jain are Rima Jain’s sons, and cousins to Karisma, Kareena and Ranbir Kapoor.

Speaking of Randhir Kapoor’s Instagram handle, the actor said in an interview that it was because of daughters Karisma and Kareena that he created an account. He said, “It just happened and it was entirely Lolo and Bebo’s decision (Karisma and Kareena). There were some pictures in the stock, they uploaded them after making the account.”

He added, “Now, Lolo and Bebo are saying that I ought to learn how to handle my account by ownself. But I am not tech-savvy at all. I don’t know anything. Whenever I want to post, I think I shall ask Lolo and Bebo to shortlist some pictures and send it to me. I shall choose from them and ask them only to upload.”

RELATED:  KGF Chapter 2: Yash Doubled His Fees Of What He Received For The First Instalment & It's Huge - Reports