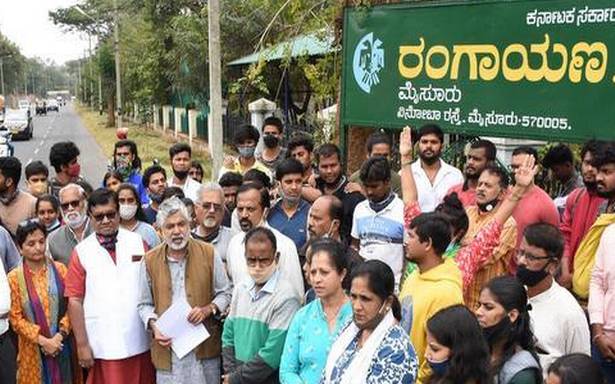 In a letter to Mayor Tasneem, Rangayana said it had requested the MCC to do so on many occasions earlier also. Now, a campaign is being launched by theatre personalities and others in support of its demand.

Rangayana Director Addanda C Cariappa, Mysuru Amateur Theatre Groups’ Federation President H.S. Suresh Babu, theatre personality Jayaram Patil and others, who were present during the launch of the campaign on Thursday, urged the Mayor to consider the appeal from theatre personalities and enthusiasts and name the road as “Padmashri B.V. Karanth Road”.

They said Rangayana is mainly accessed through the main gate on the road that leads to Kukkarahalli Lake junction and all visitors to the repertory make use of this entry though there is an access way from the main entrance of Kalamandira on Hunsur Road.

In the letter, Rangayana said B.V. Karanth was known as “Ranga Bheeshma” in Indian theatre. His contributions to Kannada theatre were immense. The contributions and services of Karanth to Mysuru, Mysuru Rangayana, Mysuru theatre artistes were invaluable. Every theatre person reveres him today because of his work to the growth of theatre.

In his memory, the road from Kalamandira Circle till Kukkarahalli Lake Circle should be named after him, demanded many theatre artistes who had assembled at the meet.

Some theatre artistes who were in the campaign said the contributions of Karanth were key for theatre movement in the State and the Rangayana has now emerged as a premier theatre repertory because of his vision. The road was developed only after Rangayana was founded. n