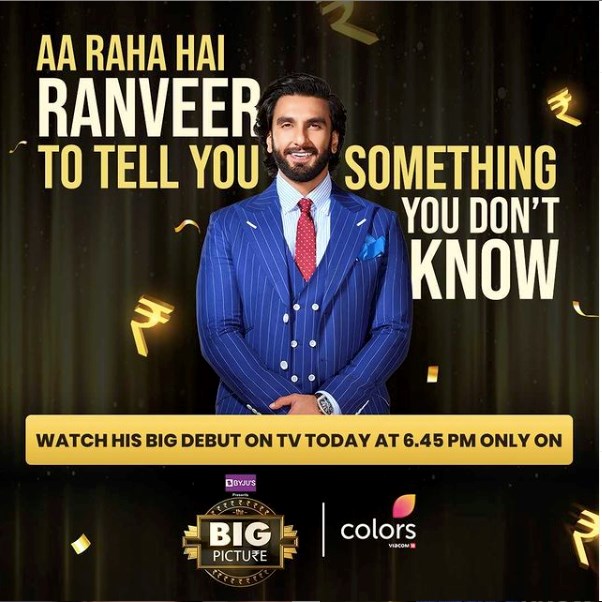 From the very first film, he paved his way into the hearts of millions and today he is amongst the most loved actors in the country. After ruling the silver screens, he is ready to make his debut on the small screen. We are talking about Ranveer Singh who is all set to make his television debut with Colors’ show ‘The Big Picture’ .

The grand unveil of the show ‘The Big Picture’ will happen today on Colors at 6:45 PM. Produced by Banijay Asia and ITV Studios Global Entertainment B.V, the show will also stream on Voot and Jio. The show is most likely to make its premiere in August.

The show will test contestants’ knowledge and visual memory. They will be given three lifelines and they would have to answer 12 visual based questions correctly to win the grand prize money. Viewers will also be able to play the game from the comfort of their homes.

It will be released in Hindi, Tamil, Telugu, Kannada and Malayalam.

He will also be seen in Jayeshbhai Jordaar which stars Shalini Pandey, Boman Irani and Ratna Pathak Shah. The film will be released on 27th August, 2021. The film is directed by Divyang Thakkar.

He will also be seen in Rohit Shetty’s Cirkus which also stars Jacqueline Fernandes and Pooja Hegde. Ranveer will be playing a double role in the film.