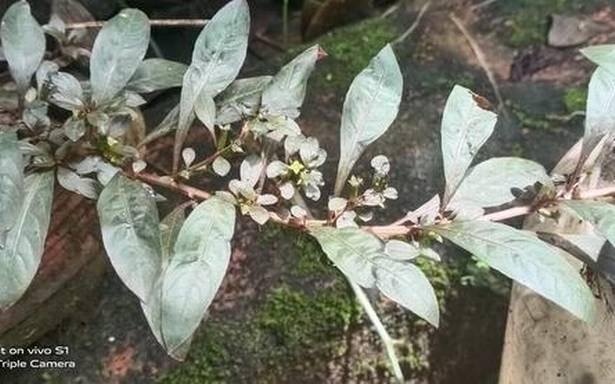 Most of the 82 species in the genus are concentrated in South America, especially Brazil

It would be quite easy to overlook this seemingly uninteresting plant if you are not a botanist. But the plant in question, a rare aquatic species of the genus Ludwigia, newly reported from the north Kerala belt of the Western Ghats, shows why conservation is important.

The team of researchers who spotted the species and christened it Ludwigia venugopalanii has recommended that it be classified as critically endangered, given its extremely low population.

What makes the finding, reported in Phytotaxa, a science journal, botanically striking is that majority of the 82 species in the genus Ludwigia are concentrated in South America. Nearly all of them are found in Brazil.

India has seven of the species and the newly spotted Ludwigia venugopalanii is reportedly endemic to India. Besides, a species of this genus is being newly reported from the country after a long time, according to the researchers.

It has been spotted only in two locations — at Valayamchal in Kannur district and in the neighbouring Kasaragod district. “The habitat has been greatly reduced due to intense anthropogenic pressure for urbanisation and also by invasion of weeds. In addition, it represents a small area of distribution,” the study in Phytotaxa noted.

An apetalous species, Ludwigia venugopalanii is described as an aquatic or semi-aquatic, branched annual herb with purple to deep brown colour. The species was found occurring in a submerged form in running waterbodies. The seeds are oblong in shape and flowering and fruiting happen from April to August.

“Its population is limited, calling for its classification as critically endangered. Without proper conservation measures, it could go extinct,” Mr. Anil Kumar said.