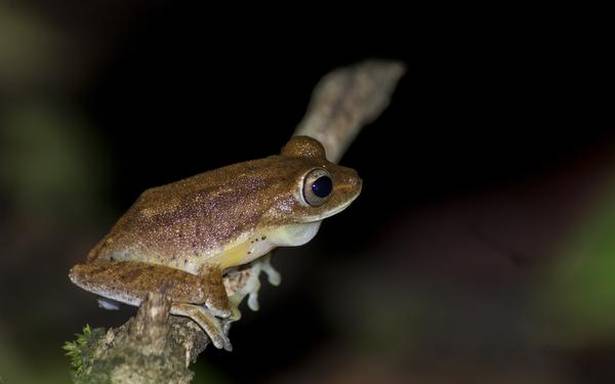 Myristica Swamp Treefrog, a rare arboreal species endemic to the Western Ghats that bears the scientific name Mercurana myristicapalustris, has been recorded for the first time north of the Shencottah gap in Vazhachal Reserve Forest in Thrissur.

The call of these frogs was identified during an exploration study by Sujith V. Gopalan, Research Scholar, University College, Thiruvananthapuram, near the road at Sukthae pocket swamp in Vazhachal forest division in 2018.

The exploration study lasted two years and the recording has been published in the December issue of ‘Reptiles & Amphibians’, an international journal dedicated to the studies of amphibians and reptiles.

“It was interesting to discover a group of adult male Mercurana myristicapalustris frogs calling from low perches in a swamp. Unlike the Myristica Swamp Treefrog found in the foothills of the Agasthyamalai, these frogs were found to be active throughout June and early July and has adapted to a non-Myristica swamp predominant with the plant Polyalthia fragrans,” says Sujith.

The frog was first described in 2013 from the lowland Myristica swamps of Arippa, near Kulathupuzha Reserve Forest, in the western foothills of Agasthyamalai. The current species was spotted by Mr. Sujith 170 km north of Arippa.

These frogs are rare and elusive for the reason that they are arboreal and active only for a few weeks during their breeding season. During this season, there is a large aggregation of males that descend from the high canopy of the trees. The males vocalise in groups from the low perches in the swamps. They exhibit unique breeding behaviour, says Sujith. The breeding season, unlike for other frogs, starts in the pre-monsoons season (May) and ends before the monsoon becomes fully active in June.

Before the end of the breeding season, the female frogs along with their male counterparts descend to the forest floor. The female digs the mud and lays eggs in shallow burrows in mud. After breeding and egg-laying, they retreat back to the high canopies of the tree and remain elusive till next breeding season.

Extended distribution of such rare frogs in the Western Ghats have conservation implications and provide a suitable niche for further studies on the diverse amphibian fauna of the Western Ghats, says Sanil George, Scientist E-II, Rajiv Gandhi Centre for Biotechnology (RGCB), Thiruvananthapuram, and D.A. Evans, Former Associate Professor, University College, Thiruvananthapuram, who have co-authored the article along with Mr. Sujith.