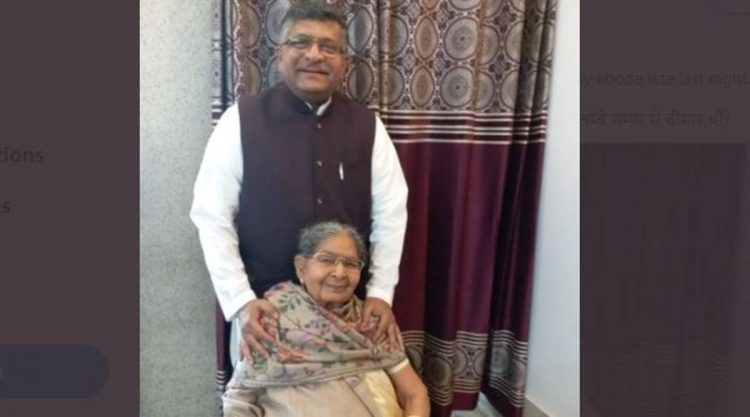 Prasad, who is also the local MP, shared the news on his Twitter handle, recalling the departed soul as “a deeply pious lady and woman of great conviction” who had been, to him, a source of inspiration.

“My mother Bimala Prasad left for her heavenly abode last night. She was ailing for some time. My mother was a deeply pious lady and a woman of great conviction. She had been supporting the party right from the beginning. She actively participated in the JP movement of Bihar as woman volunteer”, said the Union minister in a series of tweets, sharing pictures of himself taken along with his mother while she was alive.

“I recall leaders like Atal ji, Deendayal ji, (and) Nanaji Deshmukh relished food and hospitality by her during their visit to Patna. She was a source of my inspiration and all my achievements in life are because of her blessings. May her soul rest in peace”, Prasad, whose late father Thakur Prasad was a towering leader of the Jan Sangh and had served as a minister in the Janata Party government in the 1970s, added.

Kumar called up Prasad and offered words of solace to the bereaved leader.

According to family sources, the deceased was in her 90s and breathed her last at a private hospital in the city on Thursday night.