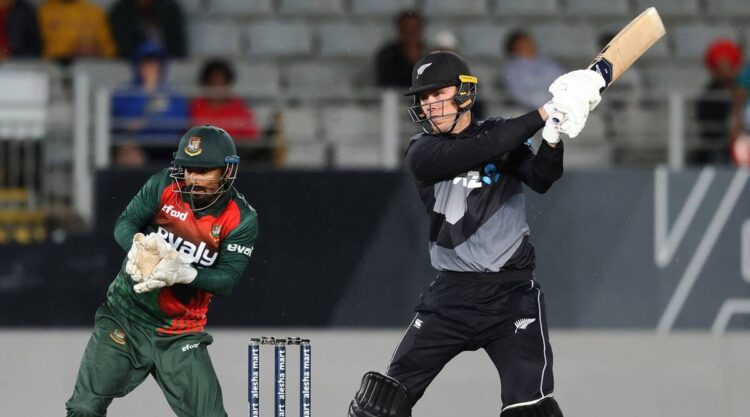 New Zealand batsman-keeper Finn Allen, the new recruit of Indian Premier League (IPL) franchise Royal Challengers Bangalore (RCB) team, showed why the franchise decided to pick him as a replacement player for the upcoming IPL 2021, thanks to an entertaining knock against Bangladesh in the third T20I match.

Finn Allen was chosen as a replacement for RCB’s Australian keeper-batsman Josh Philippe, who decided to pull out of the 14th edition of the Indian Premier League. The 21-year-old has made quite a name for himself in the New Zealand T20 circuit for his big-hitting abilities and clean glovework behind the stumps.

Allen has played 15 T20 matches, making 554 runs at an average of 42.61 and a strike-rate of 182.23 with six half-centuries and a best score of 92*. Based on this, he was also called up to the New Zealand team for the ongoing T20I series against Bangladesh. Though he made just 17 runs in the first two matches, in the third match, Allen lived up to his reputation.

New Zealand came into the third T20I match against Bangladesh being played in Auckland after having a 2-0 lead already in the three-match series. Bangladesh captain Mahmudullah won the toss and chose to field first in the rain curtailed match, which was reduced to 10 overs-per-side.

Martin Guptill and Finn Allen gave New Zealand a flyer of a start adding 85 runs in first 5.4 overs. Guptill made 44 in 19 balls with 5 sixes and 1 four, but it was Finn Allen, who stole the show with his amazing hitting as he slammed 71 in just 29 balls with 10 fours and 3 sixes to his name, with his strike-rate reading 244.83.

Thanks to Allen and Guptill, New Zealand slammed 141/4 in just 10 overs. For Bangladesh, Rubel Hossain (33 runs in 2 overs) and Mahedi Hasan (1/34 in 2 overs) were the most expensive bowlers.

Also Read: Lack Of Consistent Game Time Contributed Towards Me Not Finding The Ideal Length: Kuldeep Yadav On His Struggles During The England ODIs