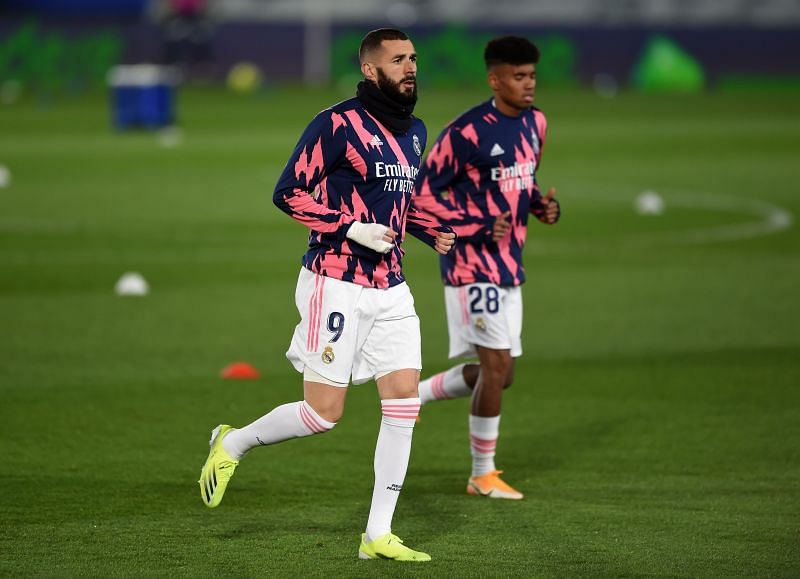 Real Madrid saw off Getafe on home soil, with second-half goals from Karim Benzema and Ferland Mendy propelling them to a 2-0 victory.

The hosts were largely frustrated in the first half as a combination of dogged defending, plus an inspired David Soaria, kept them at bay.

Karim Benzema and Luka Modric forced the Getafe goalkeeper into fine saves in the first half, while Marcelo also saw a goal-bound shot blocked in the box.

Real Madrid upped the ante in the second half and went ahead through Benzema, who headed home a cross by Vinicius Junior on the hour mark.

Their lead was doubled just six minutes later when Ferland Mendy started and ended an attacking move by poking a right-footed shot past Soria.

Here is how each Real Madrid player fared in the game.

The Belgian shot-stopper was a relative spectator for most of the game, as Getafe offered nothing in an attacking sense.

Thibaut Courtois did not have a single save to make but was on hand to deal with the few crosses that came into his box.

Marcelo made his first La Liga start since December and gave a performance that underlined his immense ability. The 32-year-old was unhinged without having to worry too much about defensive duties, and he proved to be a menace for the Getafe defence.

He ended the night having made more key passes than anybody else on the field and provided the assist for the second goal.

Ferland Mendy started in an unorthodox position as the left-sided defender in a back three. The 25-year-old discharged his defensive duties effectively, with three interceptions and one clearance made.

His attacking impetus, however, came to the fore on several occasions and his bursting run forward in the second half saw him combine brilliantly with Marcelo before putting Real Madrid two goals up.

Raphael Varane was a steady and calming presence at the heart of defence in the absence of Sergio Ramos. The France international recorded a shot off target in the game, in addition to one interception and two clearances.

It was another assured performance from Nacho Fernandes. The absence of Ramos and Eder Militao has given the Spain international an extended run in the first team, and he took advantage with another solid display.

Marvin Park had a solid if uneventful first La Liga start for Real Madrid. The 20-year-old was fielded in an unfamiliar position as a right-wing back and contributed more in defence than attack before making way in the 55th minute.

Casemiro discharged his duties effectively to ensure that the Getafe attack did not progress beyond midfield. He also had some notable moments in front of goal and should have gotten on the scoresheet in the first half.

Luka Modric has gotten back to his brilliant best in recent weeks as he put in another controlled display for Real Madrid. The Croatia international forced Soria into a save in the first half and generally dictated the tempo of the game.

Vinicius Junior was the brightest spark for Real Madrid. He combined well with Marcelo in the first half but was let down by his now-trademark poor final ball.

A switch to the right flank enabled him to produce a pristine cross for Karim Benzema to open the scoring in the second half.

Marco Asensio was the weakest link in the Real Madrid attack as he failed to make his impact felt. The Spain international got into good positions throughout the game but did not make the most of them. He was substituted for Isco with 15 minutes to go.

Karim Benzema continues to lead the line with aplomb for Real Madrid. Having missed a good chance in the first half, he made amends with a well-taken header to open the scoring in the second.

The goal was his 11th of the La Liga campaign. This means he has now been involved in 15 goals in his last 19 league games against Getafe.

Sergio Arribas was brought on to add creativity to the hosts and played his part with a solid performance.

The Spain international came on for Marco Asensio with 15 minutes to go. He completed one dribble and one tackle. He also had a passing accuracy of 100% from his nine attempted passes.

The 20-year-old had just five minutes of action and did not get enough minutes to warrant a rating.