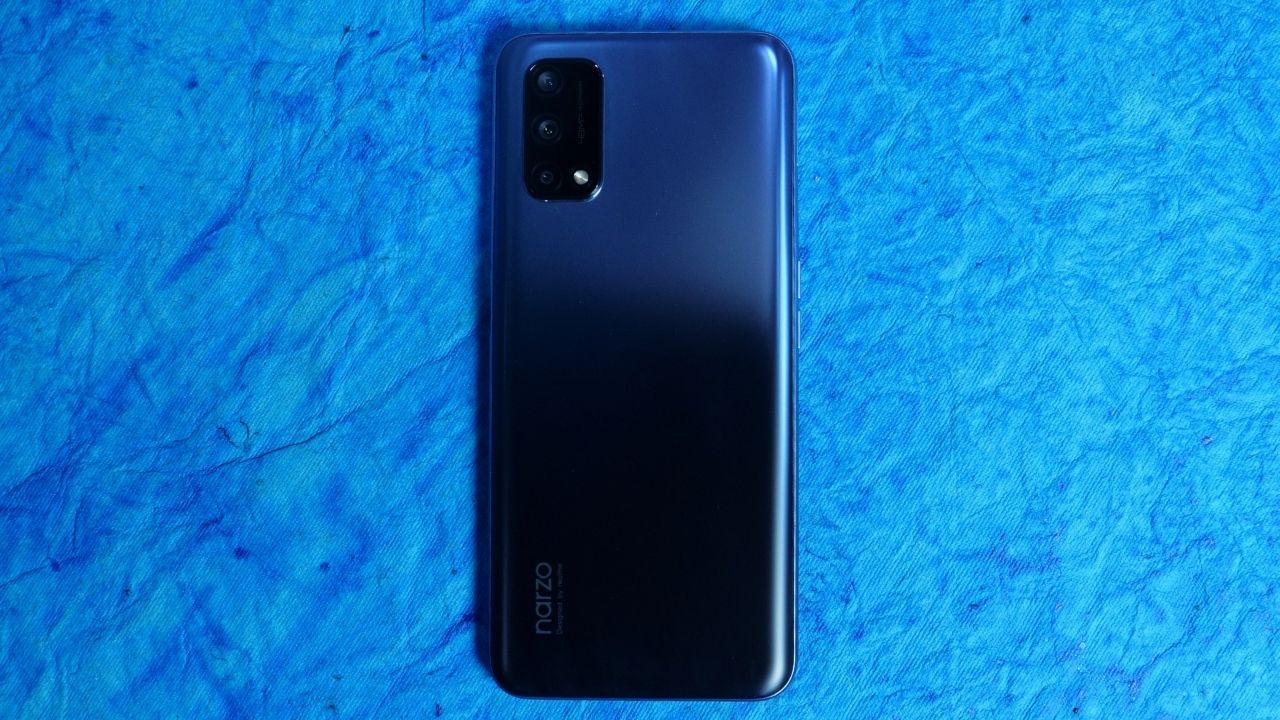 While the base variant comes with 6GB of RAM and 64GB of internal storage, there is also an 8GB RAM variant with 128GB of storage priced at Rs 19,999. Opening up the blue color box, you will be greeted by a small compartment containing a safety guide, quick guide, and protective case. Right underneath it, we found the Narzo 30 Pro 5G smartphone in Sword Black color. The device is also available in the Blade Silver color option.

Unlike the Narzo 20 Pro, the company decided to go with a minimalist approach for the back design of the newly launched Narzo 30 Pro 5G. It comes with a matte finish which can still attract a lot of fingerprints. Also, the Narzo logo can be seen at the bottom left side on the rear. There is also a 30W power adapter, USB Type-C cable, and a SIM ejector tool in the box. The triple camera setup on the rear features a 48MP primary camera with f/1.8 aperture, an 8MP ultra-wide-angle camera with f/2.3 aperture, and a 2MP macro camera with f/2.4 aperture. In comparison, the Narzo 20 Pro also came with a 2MP depth camera for portrait shots. Apart from recording 4K videos at 30 fps, the Narzo 30 Pro 5G can also shoot 120fps slow-motion videos in 1080p resolution. Even the front camera remains the same as on its predecessor. It got a 16MP selfie camera with f/2.1 aperture. Talking about the display, the Narzo 30 Pro 5G sports a 6.5-inch IPS LCD display with Full HD+ (2400 x 1080 pixels) resolution and a 120Hz high refresh rate.

It also got Corning Gorilla Glass 3 protection on the front. With the slim bezels and punch-hole camera cutout, the device offers a 90.5% screen-to-body ratio. With a peak brightness of 600 nits, the display is sufficiently bright for outdoor usage. The Narzo 30 Pro powered by the 7nm MediaTek Dimensity 800U chipset takes the performance to the next-level. The octa-core CPU clocked at up to 2.4GHz, and 3-core Mali-G57 GPU is powerful enough to handle any task. This is the same chipset that also powers the recently launched Realme X7 smartphone priced at Rs 19,999. It comes with 6GB/8GB LPDDR4X RAM and 64GB/128GB UFS 2.1 flash storage. Since the device sports an LCD panel, the company went for the side-mounted fingerprint scanner, and it is super quick to unlock. With all these high-end specs, the device packs in a 5000mAh battery. Instead of a 65W Super Dart charger, the company is only providing a 30W Dart charger. Still, the device can be charged from 0% to 100% in just 65 minutes. Apart from the proprietary Dart Charge technology, the device also supports 15W PD charging. In terms of connectivity, the Naro 30 Pro 5G with the Dimensity 800U processor offers 5G+5G dual SIM dual standby. It also supports 4G VoLTE, dual-band Wi-Fi, Bluetooth 5.0, GPS, 3.5mm audio jack, and USB Type-C port.

While the device runs on Android 10-based Realme UI 1.0 out of the box, the company has confirmed to soon roll out the Realme UI 2.0 update. In this short duration, we didn’t encounter any issues. However, the claimed battery life can’t be verified by us in this period. With the powerful chipset and 120Hz display, the UI feels super smooth on this device. At a starting price of just Rs 16,999, the Narzo 30 Pro 5G is also the 5G smartphone for the masses.

Back to Top
Close Add post
X
Netflix not working on an LG TV? Here’s how to fix it…AndroidCredit: Edgar Cervantes / Android AuthoritySmart TVs have changed the way we build our home theaters. They give us access to all of our favorite strea…

X
Reliance Jio announces New JioPhone 2021 Plans – Details and Pricing  – MobiGyaa…AndroidReliance Jio, one of the most popular telecom operators in the Indian market, has now launched new JioPhone 2021 plans, which as the name indicates, i…
close