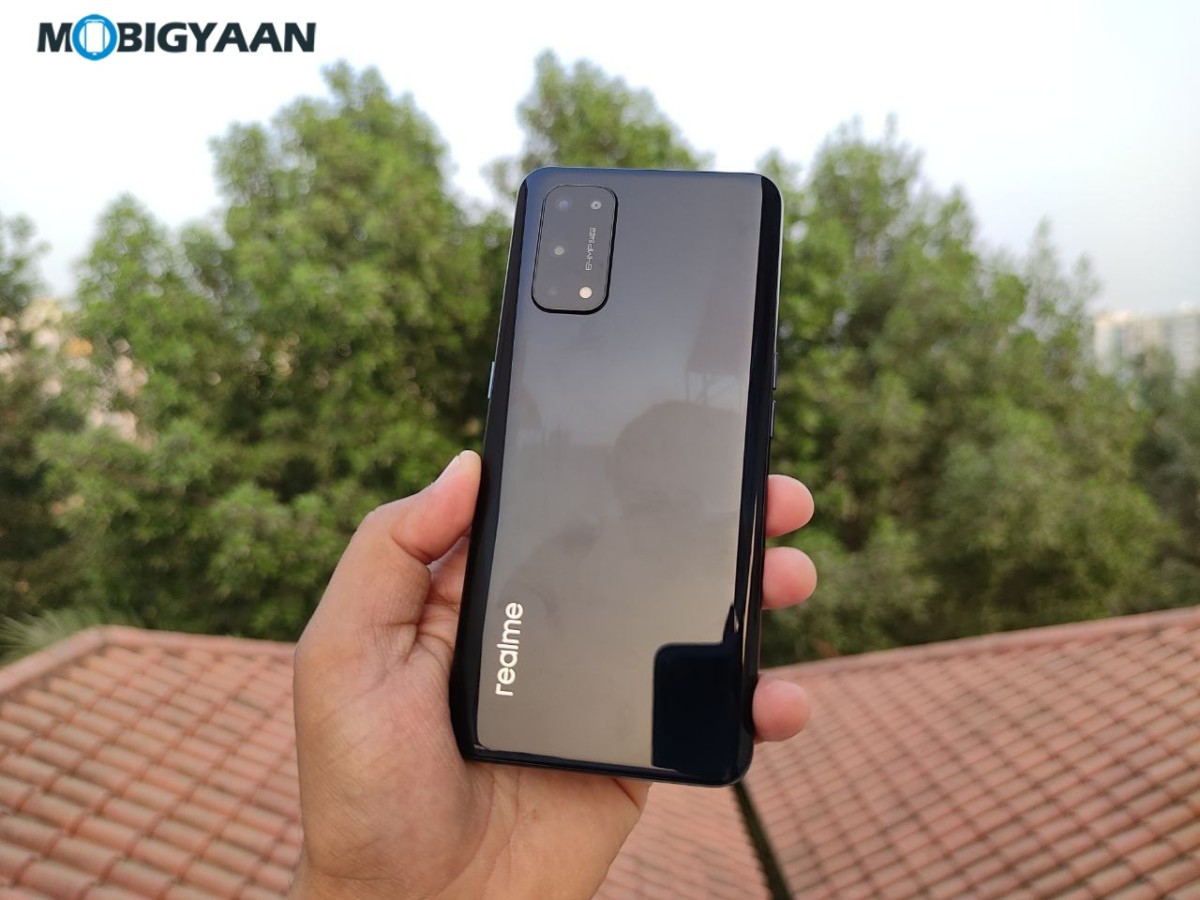 The realme X7 Pro features a glass finish design, the backside, and the front side is protected by Corning Gorilla Glass 5 with a glossy reflective 3D design. The back offers a quad-camera setup on the top-left and the bottom-left has a realme branding as usual. The sides are plastic, non-metallic but the overall build quality is solid and comfortable to hold. It’s 8.5 mm slim and light in weight – 184 grams.

What’s surprising here is its display, the front side offers a 6.55-inch Super AMOLED almost bezel-less display with a fast 120 Hz refresh rate, 240 Hz touch sampling rate. It offers a 1200 peak brightness which is comparable to flagship devices like iPhones.

realme says this is the most cutting-edge phone screen to date in its family, it uses a Super AMOLED panel from Samsung with 100% DCI-P3 color space, 4096 levels of brightness adjustment, and hardware-levels of low blue light. The screen offers an in-display fingerprint scanner for securing the phone.

You will find a punch-hole camera on the front with a single selfie camera. The bottom side has a USB Type-C port with fast charging support, a loudspeaker, microphone, and dual SIM tray, whereas the top side has nothing but a second microphone.

The SIM tray here has two 5G slots both on dual 5G standby, and the speakers are stereo, another speaker is the earpiece which couples with the loudspeaker to give a stereo effect, good for the multimedia experience.

Take a look at our unboxing and first impressions of the realme X7 Pro. The realme UI 1.0 on the realme X7 Pro feels super smooth, thanks to the 120 Hz display and 240 Hz touch sampling rate, you will feel the interface is fast and light. The transitions and the animations appear to be ultra-smooth when you interact on the screen or with the UI. There’s nothing much to say, the realme UI 1.0 seems identical to the other realme smartphones.

Speaking of the pre-installed apps on the phone, you get a bunch of third-party apps like Facebook, Flipkart, Amazon, WPS Office as well as a few apps from realme. You may remove the ones you don’t need, most apps can be removed from the system. The main highlight of the phone is its CPU, it packs a 7nm MediaTek Dimensity 1000+ flagship CPU clocked at 2.6 GHz coupled with 8 GB RAM and 128 GB onboard storage. There’s no other storage and RAM variant as of now, and this is by far the second Android smartphone with the Dimensity 1000+ CPU, the first being the OPPO Reno5 Pro 5G. On the gaming front, the Dimensity 1000+ packs a Mali-G77 MC9 9-core GPU for gaming with Vapor Cooling System and Tactile Engine for vibrations in the games. The GPU is powerful and, no doubt, remarkable, it’s as good as the Adreno 640 and optimized for the games. The overall performance of the GPU is one of the fastest in its segment and therefore able to run all games fluently.

On the camera’s front, you will find a quad-camera setup at the rear side and a single camera on the front. There’s a 64 MP main camera utilizing the Sony IMX686 sensor, 8 MP ultra-wide-angle, 2 MP macro sensor, and 2 MP depth sensor. Pretty much the same configuration you see in their midrangers, however, the primary sensor is from Sony instead of Samsung, hence the performance could be slightly better. The front side has a 32 MP camera for selfie needs. The camera records 4K at 60 fps and slow-motion videos at 240 fps on a 720p resolution (120 fps at 1080p). You can record the wide Cinema view using the Movie mode with manual controls, the camera utilizes the full screen in this mode. Speaking of the camera quality, the primary sensor i.e. the IMX686 is a charm in its quad setup, it captures amazing still shots in the daylight, and using decent night shots or low-light shots. You may use the ultra night mode, but need to hold the phone still for a couple of seconds as it doesn’t offer you stabilization.

Selfies turn out to be good and better than expected. The portraits are good in the daylight, but you can’t zoom in the portrait mode, wide-angle and macro shots are just okay, nothing special, their performance can be comparable with the midrangers.

Take a look at these samples we took from the realme X7 Pro camera.

The realme X7 Pro offers a battery of 4,500 mAh capacity with fast charging support. The battery performance is fair, the 4,500 mAh battery should provide a battery lie of up to 2 days on average use, or 1.5 days if you are using it mode often. With the Full HD+ Super AMOLED display and stereo speakers, you can enjoy as much as 15 hours of continuous video playback on a full charge battery.

You will find that there’s the 65W SuperDart fast charging which is among the fastest charging smartphone technologies in the world and it merely charges the battery in 35 minutes from 0% to 100%. Sounds cool, isn’t it? Although we saw the same charging tech on its midrange realme 7 Pro. Aside from this, it offers you about 55 minutes of heavy gaming in 3 minutes of charging, handy if you are a gamer.

Other things about its battery, the realme X7 Pro can survive as much as 89 minutes on texting if there’s only 5% battery remaining and in power-saving mode. It supports OTG reverse charging 2.5W (5V, 5A) meaning it can be used as a power bank to charge other phones.

realme X7 Pro’s 65W ultra-fast charging, the amazing 120 Hz Super AMOLED, and the flagship-level performance from the Dimensity 1000+ are some really nice and impressive traits, not forgetting the stereo speakers’ experience. The price for the realme X7 Pro is ₹29,999 for its 8 GB RAM and 128 GB storage variant and competes with the ₹27,999 OnePlus Nord, and it’s clear that the realme X7 Pro emerges with a better overall position in terms of performance, display, and charging.

This article is auto-generated by Algorithm Source: www.mobigyaan.com