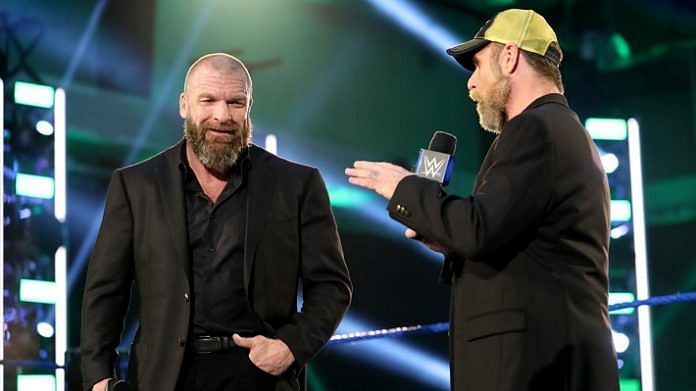 Former WWE writer Vince Russo has explained why he used an idea from Triple H and Shawn Michaels in IMPACT Wrestling (fka TNA) in 2002.

Speaking to SK Wrestling’s Lee Walker, Russo explained that The Flying Elvises faction in IMPACT Wrestling was not his idea. The three-man group – Jimmy Yang, Jorge Estrada, and Sonny Siaki – was originally suggested by Triple H and Michaels in WWE.

“I remember Triple H and Shawn Michaels pitching to me The Flying Elvises and I thought it was freaking hysterical, and then all of a sudden I go to TNA and we’ve kind of got these guys that would kind of fit the bill. So I never claimed it as my own idea. I thought it was a funny, hysterical idea from Hunter [Triple H] and Shawn, and I never forgot it. That’s why when I went to TNA we had the opportunity to do it, I did it.”

Watch the video above to find out Vince Russo’s thoughts on WWE’s current booking of AJ Styles. He also discussed an interesting storyline development that once took place in WCW.

The Flying Elvises wore Elvis Presley jumpsuits and impersonated the singer’s voice and mannerisms. The group only lasted from June 2002 to October 2002 before they went their separate ways.

Although Triple H and Shawn Michaels came up with The Flying Elvises, the idea was never used on WWE television.

Please credit SK Wrestling and embed the video interview if you use quotes from this article.