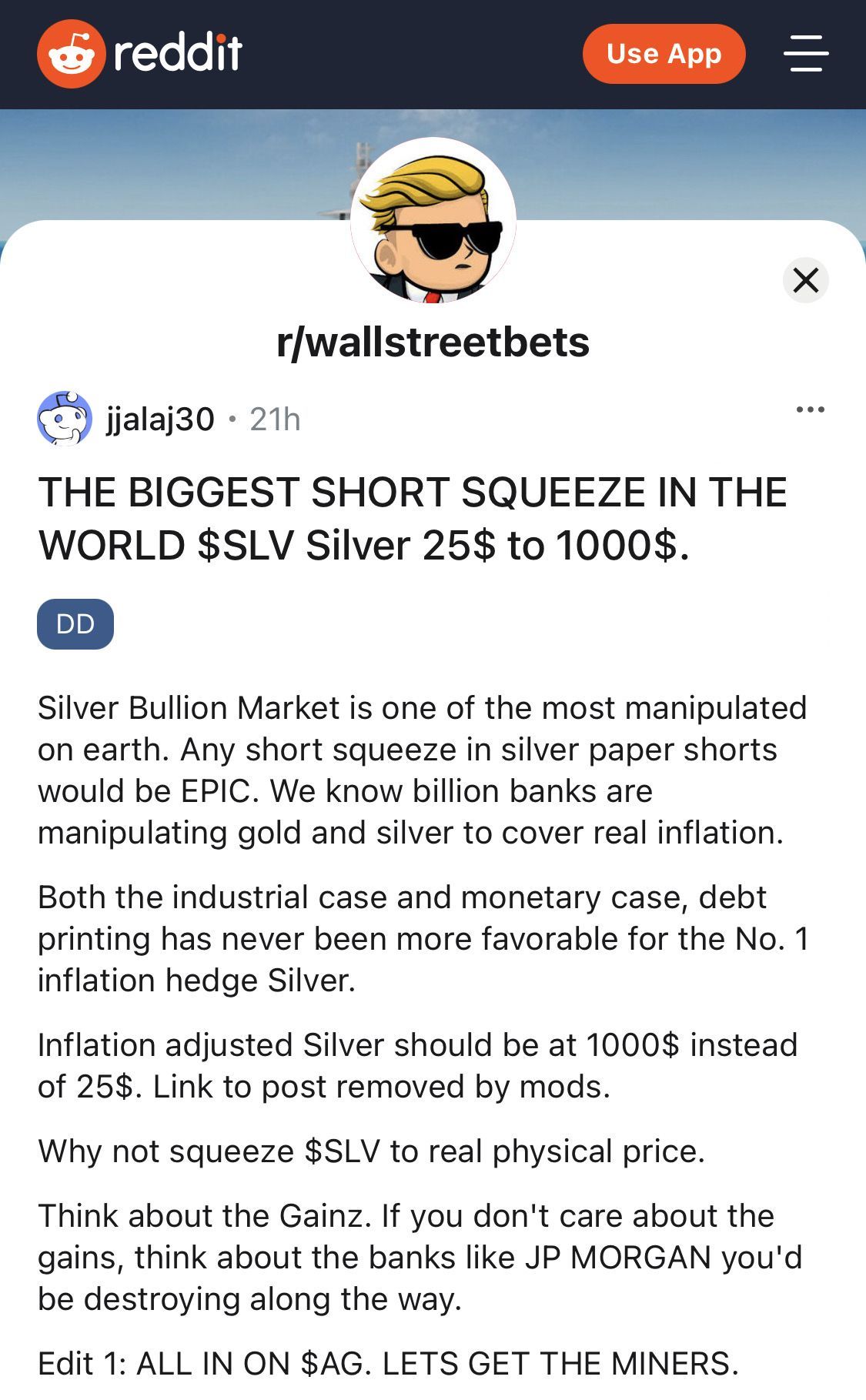 (Bloomberg) — Signs that the silver market was about to get hit by a GameStop-style short squeeze emerged Wednesday.

That’s when comments began appearing on the Reddit forum r/wallstreetbets — the investor board now famous for tripling the video game company’s shares this week. People started egging each other on to pile into silver’s largest exchange-traded product. Banks have been keeping silver prices artificially low, they said, masking an actual shortfall of supplies. Help put an end to “THE BIGGEST SHORT SQUEEZE IN THE WORLD,” one poster said.

To say there was a strategy would be overstating things. At about 8:30 a.m. New York time on Thursday, day traders bent on teaching some banks a lesson began flooding iShares Silver Trust. Their buying drove up prices of the underlying metal by as much as 6.8%, the most since August. And just like that, an ETF became the Trojan horse that helped the Reddit hoards break through the gates of the commodities world for the first time since they began upending equities.

It rippled across the entire silver complex. Miners of the metal rallied. Futures gained. A record 3.1 million iShares Silver Trust options contracts traded. The volatility was unlike anything James Gavilan, a commodities market consultant with over two decades of experience in precious metals, had ever seen.

It was “mind-boggling, breath-taking, it’s shocking really,” he said as prices continued to rise further.

At least one person on the r/wallstreetbets board made note of the mob’s move beyond stocks for the first time. Just hours ahead of the run-up, someone posted, “The market would go catatonic if WSB sparked a short squeeze on a commodity. Go for it.”

Market manipulation has been the rallying cry of conspiracy theorists in precious metals circles for decades, if not centuries. With their constant railing against banks and big government colluding to mask inflation, it was only a matter of time before they and retail investors raging against the financial machine joined forces.

It’s not clear whether Reddit investors will target another commodity again. Spot silver extended gains on Friday, rising as much as 4.3%, while iShares Silver Trust gained 2.4% in early New York trading. First Majestic, a silver miner that surged 21% on Thursday, rose as much as 13% on Friday. Plenty have posted on the same board about piling into other markets, including corn.

But good luck moving those commodities, consultants and analysts say.

Buying an ETF requires the fund at some point to find more metal, oil or agricultural products to back up the trades. This could kill momentum for investors trying to rally a short squeeze. It also could take days to secure physical materials to support the ETF buying, meaning investors may lose interest and move on to other targets.

While the price of equities often relies on expectations for future performance, commodities are driven by fundamentals of supply and demand. For retail investors to push up silver prices the way they did GameStop and AMC Entertainment Holdings Inc., it might take significantly more time, even with tireless buying by speculators, according to Tai Wong, the director of metals trading at BMO Capital Markets in New York.

“You can have as much flow as you want on the speculative side,” Bart Melek, the head commodities strategist at TD Securities who has covered the space for more than 20 years, said in a phone interview. “But in the end the supply and demand will win.”

There’s a lack of visibility on short positions. Commodity markets underlie exchange-traded products, mining companies and various other investment vehicles, making it difficult to know what institutions are in short positions.

Also, there’s virtually no retail investor access to trading the physical markets. Most commodity exchange trading is done by institutions.

Size is another hurdle. GameStop had a $1.2 billion market capitalization at the beginning of the year, and on Wednesday touched $24.2 billion. Global oil consumption was valued at $2.2 trillion last year, the global gold market is valued at close to $11 trillion. For silver, 1.65 billion ounces are held in London vaults alone, valued at about $43.89 billion.

The Reddit push is still real, and Thursday’s run on the silver market left many traders concerned and sitting on the sidelines to avoid risks of the Reddit-induced surge morphing into something bigger.

Michael McDougall, managing director at Paragon Global Markets, a broker for soft commodities and grains, said unlike stocks, almost every commodity trade has someone on the short side and the long side.

“Futures are unlike stocks in that they are a zero-sum game. For every long there is a short. Stocks are not as evenly balanced,” McDougall said. “This does not mean that a concerted attack can’t have a limited impact, but liquidity in corn, soy and sugar at least, is sufficiently large to absorb a large amount of small account activity.”