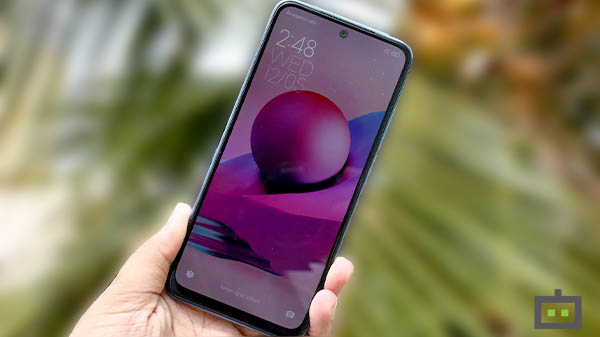 Though the Redmi Note 10S has a plastic back panel, it is one of those good plastic finishes with a glossy finish, which almost mimics glass. Not just that, the Redmi Note 10S is also light in weight, as it just weighs 178.8 grams. The phone comes bundled with a plastic case in the box, in case you want to protect the phone from scratches.

I have been using the Redmi Note 10S without a case and it hasn’t picked up any permanent scratches that I could notice. And the dual-tone finish is also one of the best that have seen on a phone of this price range. I also liked the fact that the top and bottom portion of the frames have been flattened out, which means, the Redmi Note 10S can stand vertically without any support.

When compared to the Redmi Note 9 series, the Redmi Note 10S has a smaller fingerprint sensor. Despite a smaller sensor, I didn’t face any issues when it comes to fingerprint recognition. The SIM tray is on the top right side, which can house two nano SIMs and a microSD card at the same time.

The phone is also IP53 certified for water and dust resistance. Though you might not be able to take this phone to a beach or a pool, the Redmi Note 10S should survive an accidental water splash or a beverage spill. Do note that, if the device attains liquid damage, the phone will not be covered in warranty like every other smartphone.

With over 400 pixels per inch, the screen on the Redmi Note 10S is sharp and is protected by a 2.5D curved tempered glass. The phone comes with a pre-installed screen protector for an added peace of mind. With a peak brightness of 1100 nits and a sustainable HBM 700nits, this 8-bit panel is one of the brightest screens at this price range.

The Redmi Note 10S also offers various color modes, including auto, vivid, and, standard. The standard color mode looks a bit dull in my opinion, while the auto mode offers a balance of saturation while being true to life. If you like slightly saturated colors, then choose the vivid mode, which makes colors pop, and this is the setting that I personally use.

At this price range, there are a lot of options in the market, and The Redmi Note 10S’s offering does make a lot of sense, considering most games are limited to 60Hz, giving the capability of the processor. Overall, the Redmi Note 10S definitely has an above-average display and is a good option for those, who watch a lot of videos and movies on platforms like YouTube, Prime Video, Hotstar, or any other OTT platform.

The primary also camera shoots some great photos, especially in close-up conditions, where, you get a natural bokeh-like effect, which helps to highlight the subject. This photo of the flower was taken in normal mode, and there is clear edge detection and the flower also looks vivid.

In this photo, the camera has captured a good amount of details even at the regular 16MP resolution. In fact, even after zooming in, I could read the text written on the DTH antenna. I also felt that the primary camera performance of the Redmi Note 10S is a lot better than the devices like the Realme 8 5G, which also costs similar to the Redmi Note 10S.

When it comes to ultra-wide angle lenses, there is a noticeable difference between the color science when compared to the primary 64MP sensor. The 8MP ultra wide-angle lens has a slightly warmer tone and it lacks details, due to the lower resolution.

The macro lens on the Redmi Note 10S has a lower focus distance, and in good lighting conditions, it takes some excellent macro shots, which gives a new perspective to the subject. This is a photo of old cloth, where, the Redmi Note 10S captured individual threads of the fabric.

Another picture that I have captured on the Redmi Note 10S is the bud of a plant. In this picture, there is a clear separation between the subject and the background, which highlights the bud of the plant, making the subject the highlight of the photo.

Lastly, when it comes to the selfie camera, the 13MP sensor takes good photos in almost every situation. Make sure that you have turned off the beauty mode to get photos that look life-like, as the beauty mode is turned off by default. Overall, the camera performance of the Redmi Note 10S is above average.

The Redmi Note 10S is powered by the MediaTek Helio G95 SoC, which offers similar CPU performance to the Helio G90 but comes with a much better graphics chip, offering improved graphics and gaming performance. The base model of the Redmi Note 10S comes with 6GB RAM and 64GB storage, while the high-end model offers 6GB RAM and 128GB internal storage.

On Geekbench 5, the Redmi Note 10S scored 199 points on single-core and 924 on multi-core CPU performance. On AnTuTu V9, the Redmi Note 10S posted 323640 points. The phone was at 35.2 degrees centigrade while launching the AnTuTu benchmark, and it reached a peak temperature of 40.2 degrees centigrade and the temperature came down to 38.6 at the end.

There is a four percent power consumption to run this benchmark. This should give an insight into the performance of the Redmi Note 10S. And while playing COD: Mobile, I noticed that the phone got warned around the camera area with just 10 minutes of gameplay. However, the phone did come back to room temperature within a few minutes.

When it comes to normal day-to-day usage I didn’t notice any major issues with the performance. However, every once in a while, I did notice a frame drops, especially while opening an app/game or while switching between different apps.

The Redmi Note 10S is the first smartphone in India to ship with MIUI 12.5 based on Android 11 OS. It claims to offer a better user experience when compared to the MIUI 12, as it allows users to uninstall most first-party apps. In my testing, the Redmi Note 10S is running on MIUI 12.5.2. However, we weren’t able to uninstall most first-party apps.

Though the Redmi Note 10S runs on MIUI 12.5.2, it almost felt like a Redmi/Xiaomi phone with MIUI 12. One positive note is that I didn’t see any ads across the UI. However, the phone still has a lot of bloatware, and the company claims that a future software update should fix the same. We hope, the company rolls out the update before the phone goes on sale.

The Redmi Note 10S comes with a 5000 mAh battery with support for 33W fast charging and the fast charger is included with the phone. For an average user, who makes an hour of voice calls, a few hours of video consumption, an hour of gaming, and a bit of social media usage, the Redmi Note 10S should last all day long, as it can easily offer around 6 to 7 hours of screen-on-time without any issue.

Not just that, the 33W fast charger also helps the smartphone to quickly refill the battery in less than one and a half hours. Do note that, the phone can from 0 to 54 percent in less than just 30 minutes using the 33W fast charger. If you are looking for a phone that can deliver all-day battery life, the Redmi Note 10S is definitely one of those devices. However, if you need a phone that lasts a little longer, you might have to look at devices with at least a 6000 mAh battery.

Back to Top
Close Add post
X
Flashback: a brief history of BluetoothTechnologyIt took years but USB eventually replaced the weird proprietary connectors of early mobile phones. However, years before USB became the norm another d…