Remains of Two Killed in Vesuvius Eruption Are Discovered at Pompeii 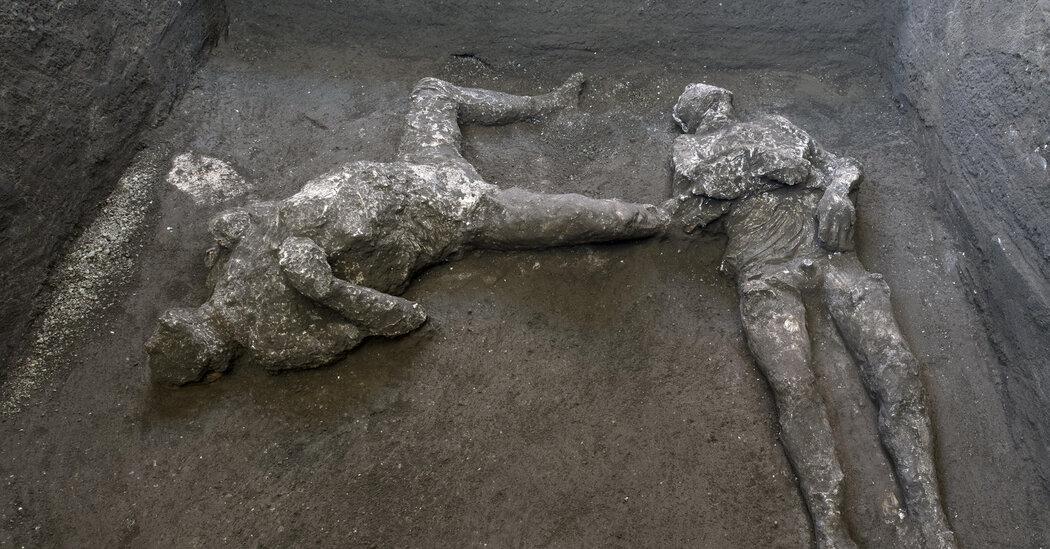 ROME — Excavations at a suburban villa outside ancient Pompeii this month have recovered the remains of two original dwellers frozen in time by an eruption of Mount Vesuvius one fateful morning nearly 2,000 years ago.

The unearthing of the two victims — whom archaeologists tentatively identified as a wealthy Pompeian landowner and a younger enslaved person — offered new insight into the eruption that buried the ancient Roman town, which has been a source of popular fascination since its rediscovery in the 18th century.

The finding is an “incredible font of knowledge for us,” said Massimo Osanna, the departing director of the Archaeological Park of Pompeii, said in a video issued by the Culture Ministry on Saturday. He noted that it was also “a touching discovery of great emotional impact.”

For one thing, the two were dressed in woolen clothing, adding credence to the belief that the eruption occurred in October of 79 A.D. rather than in August of that year as had previously been thought, Mr. Osanna said later in a telephone interview.

The Vesuvius eruption was described in an eyewitness account by the Roman magistrate Pliny the Younger as “an extraordinary and alarming scene.” Buried by ash, pumice and rocks, Pompeii and neighboring cities lay mostly dormant, though intact, until 1748, when King Charles III of Bourbon commissioned the first official excavations of the site.

Since then, much of the ancient city has been unearthed, providing archaeologists and historians with a wealth of information about how its ancient dwellers lived, from their home décor to what they ate to the tools they used.

Using a method refined by the Italian archaeologist Giuseppe Fiorelli in 1863 and further honed with modern technology, archaeologists last week made plaster casts of the two newly discovered victims. That brings the ranks of Pompeii’s posthumous effigies to more than 100.

In addition to being the first time in half a century that archaeologists created such casts linked to Pompeii — an attempt using cement in the 1990s was not successful — the new casts are also remarkable in the surprising details they captured, including what Mr. Osanna described as the “extraordinary drapery” of their woolen clothing.

Archaeologists posit that the two victims had sought refuge in an underground cryptoporticus, or corridor, before being engulfed by a shower of pumice stones, ash and lapilli.

“They very likely died by thermal shock, as the contracted limbs, hands and feet would suggest,” Mr. Osanna said in the video, adding that DNA testing was being carried out on the recovered bones. Pompeii officials believe the older man to have been 30 to 40 years old, and the younger between 18 and 23.

The villa where the discovery was made is in Civita Giuliana, an area about 750 yards northwest of Pompeii’s ancient walls, which has already yielded important finds, including a purebred horse with a bronze-plated saddle uncovered in 2018.

Although the archaeological park closed to visitors on Nov. 6 because of coronavirus restrictions, excavations at the site have continued.

The villa at Civita Giuliana was first excavated briefly in 1907 and 1908. But because it is on private property, the sort of government-commissioned excavations typically carried out on public land did not take place. That changed in 2017, when prosecutors in nearby Torre Annunziata charged a group of people with robbing tombs and looting the site using underground tunnels.

The culture ministry is in the process of buying the land where the villa is situated, and Mr. Osanna said he hoped it could eventually open to the public.

With more than 50 acres still to be excavated, Pompeii continues to be “an incredible site for research, study and training,” Culture Minister Dario Franceschini said in a statement on Saturday. It is, he said, a mission for the “archaeologists of today and the future.”