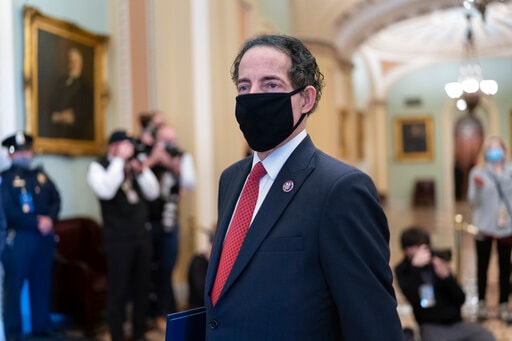 WASHINGTON: The congressmans voice cracked and he paused to drink from a bottle of water as he told of apologizing to his daughter for bringing her to the U.S. Capitol on the day a deadly mob overran it.

But it was recalling what she said to him next, after he assured her nothing like that would happen again, that made Maryland Democratic Rep. Jamie Raskin break down.

She said, Dad, I dont want to come back to the Capitol,’ Raskin said softly, squeezing his nose and shaking his head to clear away tears. Of all the terrible, brutal things I saw and I heard on that day and since then, that one hit me the hardest.”

Raskin, 58, a former constitutional law professor, is leading the impeachment prosecution in the Senate of former President Donald Trump, who is charged with inciting last month’s siege of the Capitol to overturn the election he lost to Democrat Joe Biden. Five people died as a result of the insurrection. Trump is the first president to face an impeachment trial after leaving office and the first to be twice impeached.

Though acquittal is likely thanks to Senate Republicans who have remained loyal to the ex-president, the proceedings have greatly raised the national profile of Raskin, who is serving as the Democrats’ impeachment manager. On Tuesday, he punctuated harrowing accounts of rioters laying siege to one the leading symbols of American democracy by drawing on tragedy in his own life.

Raskin’s 25-year-old son, Tommy, a law student at Harvard, his father’s alma mater, killed himself on New Years Eve after years of struggles with depression, and was buried the following Tuesday. Raskin’s grown daughter, Tabitha, and his son-in-law, Hank, accompanied him to the Capitol the next day Jan. 6 when rioters unleashed their rampage.

Raskin recalled how the pair wondered if going with him would be safe given Trump had exhorted his supporters to come to Washington for a rally championing the then-president’s baseless claims that he lost November’s presidential election because of fraud. Of course they’d be safe, Raskin remembered responding, because “this is the Capitol.

Trump’s claims of fraud were repeatedly dismissed, including by Republican judges who have ruled the lawsuits lacked evidence. But on Jan. 6, Trump exhorted his followers to march to the Capitol and fight like hell.

The mob eventually breached the building, and Raskin described lawmakers on the House floor being instructed to put on gas masks. And then there was a sound I will never forget, the sound of pounding on the door like a battering ram. The most haunting sound I ever heard, and I will never forget it,” he said.

Raskin said his daughter and son-in-law were locked in a nearby office, hiding under a desk placing what they thought were their final texts and whispered phone calls.

They thought they were going to die, he said.

When it was over and the family reunited, Raskin said he promised his daughter that it would not be like this again the next time she went to the Capitol only to have her say she had no interest in coming back. The congressman said that exchange, as well as watching someone use an American flagpole, with the flag still on it, to spear and pummel” a Capitol Police officer “ruthlessly, were his worst memories of the insurrection.

This cannot be the future of America, Raskin said through more tears. We cannot have presidents inciting and mobilizing mob violence against our government and our institutions because they refused to accept the will of the people under the Constitution of the United States.