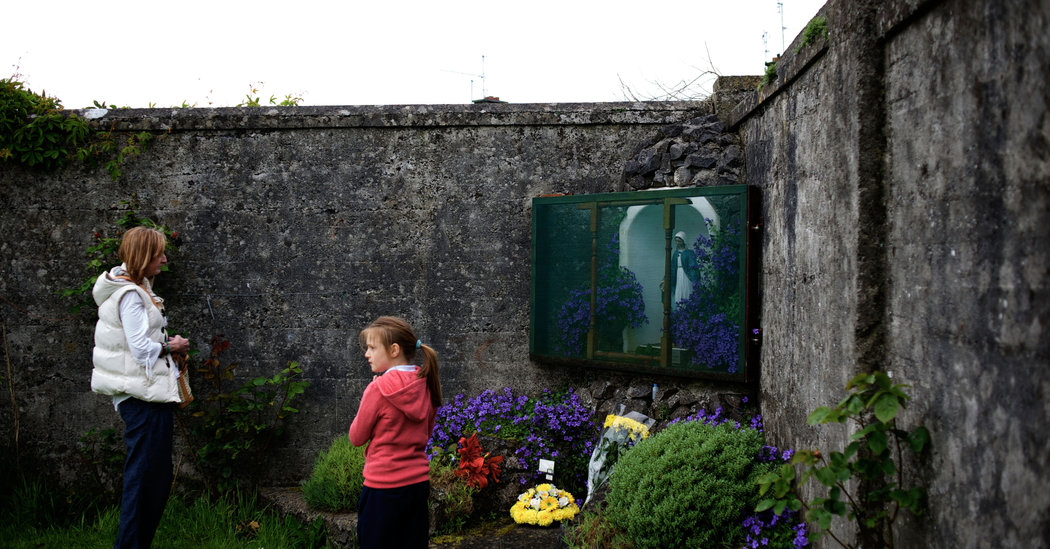 A government-commissioned report released on Tuesday found a shocking number of deaths and widespread abuses at religious institutions in Ireland for unwed mothers and their children. Survivors say the document is a small step toward accountability after decades of horrors.

The report, the culmination of a six-year investigation, detailed some 9,000 deaths of children at 14 of the country’s so-called mother and baby homes and four county homes over several decades, a mortality rate far higher than the rest of the population. The institutions, where unmarried women and girls were sent to give birth in secrecy and were pressured to give their children up for adoption, were also responsible for unethical vaccine trials and traumatic emotional abuse, the report found.

For decades, the stories of these places and the atrocities carried out in them, were largely unspoken — despite calls from the mothers who became virtual prisoners within their walls and children who spent their earliest years there, later sharing stories of neglect and abuse.

But as the country has made strides to reckon with uglier aspects of its conservative Roman Catholic roots, deeply intertwined with the foundation of the state, there have been recent moments when the scale of the systemic abuses has been thrust into the light.

Tuesday was one of those days.

Ireland’s leader, or Taoiseach, Micheal Martin, at a news conference said the report outlined a “a dark, difficult and shameful chapter” of the country’s past, acknowledging significant failures by the state, society and church.

“It opens a window onto a deeply misogynistic culture in Ireland over several decades, with serious and systematic discrimination against women, especially those who gave birth outside of marriage,” he said. “We did this to ourselves as a society.”

Survivors of the homes say urgent action by the state is needed, and many say the Roman Catholic church, which ran the homes, needs to be held more fully accountable.

The Coalition of Mother and Baby Home Survivors said it was disappointed in the “fundamentally incomplete” nature of the final report.

Mr. Martin and the country’s minister for children, Roderic O’Gorman, spoke with survivors earlier in the afternoon by video to discuss the contents of the report, which is more than 3,000 pages. Mr. Martin said he would issue an official state apology in front of Parliament on Wednesday, and Mr. O’Gorman pledged that the government was committed to working with survivors.

Mother and baby homes were run by religious orders, starting in the 1920s, and funded by the Irish government. But the institutions where young women and girls were taken, typically against their will, are not a thing of Ireland’s distant past. The last of the facilities was closed in 1998.

The commission focused on 18 institutions between 1922 to 1998, and was set up after reports emerged that the remains of nearly 800 babies and children were interred in an unmarked mass grave at a home run by nuns in the town of Tuam in County Galway.

Attention was initially drawn to the situation by the extensive research of a local, amateur historian, Catherine Corless, who pieced together records showing dozens of suspicious deaths of infants and children at the St. Mary’s Mother and Baby Home, but no graves associated with them. Mr. Martin thanked her by name Tuesday, calling her a “tireless crusader of dignity and truth.”

“It has been a long journey, and it hasn’t been easy,” Ms. Corless said in an interview on Tuesday morning. As evidence had piled up over the years, she said she felt compelled to pressure the government to take notice. “That’s all I could do: keep talking, keep being a voice for the people who had no voice.”

In the wake of her work, the government was forced to pay attention and formed the commission in 2015. A significant number of human remains were found at the site in Tuam in 2017.

Ms. Corless acknowledged that Tuesday was a “big day” for survivors, but said an apology from the state simply did not go far enough. She said the Bon Secours nuns, who ran the facility in Tuam, and orders that oversaw others, needed to be held accountable.

The atrocities did not play out just in Tuam. The 18 homes in Tuesday’s report spanned the country and were run by different groups of nuns. The Church ran the homes, but the newly founded Irish state worked hand-in-hand with them making many effectively state institutions in all but name.

The report detailed how 56,000 unmarried mothers and about 57,000 children came through the homes investigated by the commission during a 76-year period. It attempted to differentiate between the earliest years of the home and those that came later.

“In the years before 1960 mother and baby homes did not save the lives of ‘illegitimate’ children; in fact, they appear to have significantly reduced their prospects of survival,” the report said, adding that the women and children “should not have been in the institutions” at all.

But it also said there was “no evidence of the sort of gross abuse that occurred in industrial schools,” and said women were not forced by the state or church to enter the homes, though they were left with little choice, a point survivors took issue with.

The homes were just one part of a larger system that exploited and suppressed some of the country’s most vulnerable women and girls. Considered “fallen women,” they were relegated to the fringes, and even when they were not confined to mother and baby homes — were often pressured into giving up their newborns, often in shadowy adoptions.

After Ireland’s Sunday Independent published details of the report this week, KRW Law Human Rights, which represents a number of survivors, said the leak had further undermined confidence in the commission.

Marie Arbuckle, a survivor of one of the homes in Dublin where she gave birth to a son in 1981, said the decades since have been painful and felt the report barely scratched the surface.

“Taking a baby away from a mother, how can you say that’s not abuse?” she said. “No matter what apology they give, it cannot take back what they have stolen from us already, but own up.”

The commission’s archive has been handed over to the country’s child and family agency, though survivors had raised concerns about access to the materials. The government vowed to ensure access to their personal information and said counseling services were being offered. Mr. O’Gorman said the government had written to the religious orders involved to arrange a meeting to urge an apology and to seek compensation for the survivors.

But the church has been silent on the issue in the past.

For the survivors, the report is only the start, Ms. Corless said, adding it was time for the church and the religious orders to apologize and work with the survivors.

“Really and truly, they need an apology, not just want it, they need it for healing,” she said. “We are depending on that.”